I haven’t really touched on the massive ammo purchases made by the Department Of Homeland Security over the past 2 years or more. 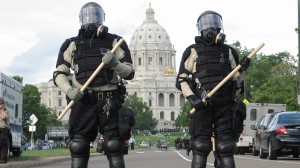 So much of what was out there seemed to be more in the way of conspiracy theories. I’m not particularly concerned with some sort of crackdown by DHS on citizens. But, Congress does have a few concerns….well, Republicans do.

Liberals, not so much, because a Dem is in the White House.

(Fox News[2]) Republican Rep. Jason Chaffetz said Thursday that the Department of Homeland Security is using roughly 1,000 rounds of ammunition more per person than the U.S. Army, as he and other lawmakers sharply questioned DHS officials on their “massive” bullet buys.

“It is entirely … inexplicable why the Department of Homeland Security needs so much ammunition,” Chaffetz, R-Utah, said at a hearing.

Comparing that with the small-arms purchases procured by the U.S. Army, he said the DHS is churning through between 1,300 and 1,600 rounds per officer, while the U.S. Army goes through roughly 350 rounds per soldier.

A DHS spokesman said that DHS was not trying to purchase 1.5 billion rounds over 5 years, just 750 million. And that they weren’t trying to stockpile. Republicans complain about the sheer waste.

Rep. Darrell Issa, R-Calif., who chairs the full Oversight and Government Reform Committee, said he suspects rounds are being stockpiled, and then either “disposed of,” passed to non-federal agencies, or shot “indiscriminately.”

I suspect that DHS is doing this for two reasons: 1st, because they can, and like any government agency, they like wasting money that’s not theirs because they can. Second, I suspect that they are trying to purchase lots of ammo in order to do what they can to dry the private market up and increase consumer costs. Let’s not forget that when Obama assumed the Presidency the military started destroying used cartridges instead of selling them back to the market, and are still doing it[3]. Brass is the most expensive part[4], and this is a huge waste of taxpayer dollars.

(The Blaze[5]) Republicans in the Senate and House are expected to introduce a joint bill Friday that would limit the amount of ammunition that federal agencies are allowed to buy and stockpile over the next six months, the Washington Free Beacon reports[6].

The bill, titled the Ammunition Management for More Accountability or “AMMO” Act, is being proposed after several lawmakers have voiced concerns about some federal agencies, like the Department of Homeland Security, seemingly stockpiling large quantities of ammo.

Expect a lively discussion in the House, with Democrats trotting out looney tune speeches. The norm.