Obama Supporters Explain Why They Love Obama: He “Gives Me Stuff” And I Don’t Have To Work

Liberals love people who freeload off of the taxpayers[1] because if they do vote, they’re definitely voting for Democrats. 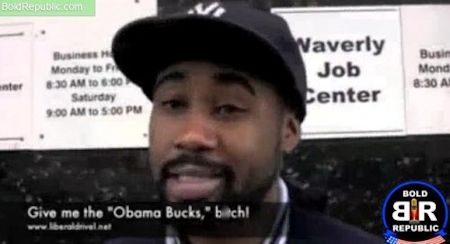 A video montage hit YouTube lately showing a massive collection of lazy, freeloading, Obama supporters. As a reporter says at the end of the video, “This is the model citizen in Barack Obama’s mission.”

…The video begins with people in line for “Obama Bucks,” or money from Obama’s stimulus package, and are asked why they voted for Obama. In a unanimous response, the people answer that Obama gives them free “stuff.” Whether they were talking about food stamps, welfare, or Obama bucks, they all illustrated the same point.

In an even more disturbing demonstration, reporters asked the people in line where they believed the money they were getting came from. The people unfortunately could not answer making up things such as “Obama’s Stash.”

These freeloaders have been poorly educated on the topic, do not understand what they are doing to this county — and that is exactly how Obama would have it. He was already elected to his second term, so now all he has to do, is bide his time until his final term expires, and pass the mess he created on to someone else.

The best thing that could happen to any of the people in this video would be to lose access to their government benefits, so they’d be forced to fend for themselves. It might be easy or fun, but that’s the road that will take these people towards self-respect.