Don’t worry, Obama’s cool with this, it’s Someone Else’s money, and he can always get more. 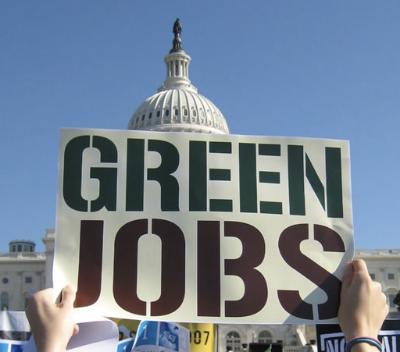 (Institute for Energy Research[2]) Without much fanfare, the Department of Energy (DOE) recently updated the list of loan guarantee projects[3] on its website. Unlike in 2008, when Barack Obama pledged to create 5 million jobs over 10 years by directing taxpayer funds toward renewable energy projects, there were no press conferences or stump speeches. But the data are nonetheless revealing: for the over $26 billion spent since 2009, DOE Section 1703 and 1705 loan guarantees have created only 2,298 permanent jobs for a cost of over $11.45 million per job.

I still hate those commercials. Just like I hate wasting taxpayer money on endeavors that are mostly bound to fail. Most of the waste on the DOE list comes from solar company investment. Cue the E-trade baby again.

As the astronomical cost of the DOE’s loan guarantee program indicates, subsidizing renewable energy is not a good deal for taxpayers. But loan guarantees are just one of the ways the federal government bankrolls risky green energy projects. Energy-related tax preferences cost taxpayers about $13.5 billion in FY 2012, according to the Joint Committee on Taxation[5]. But solar and wind power, for which the majority of the tax preferences for renewable energy were directed, produced only 3.6 percent[6] of the nation’s generation in 2012. In addition, the Treasury Department’s 1603 grant program, which offers cash payments to renewable energy companies, cost taxpayers $5.8 billion[7] in 2012. Many states also subsidize green energy through tax preferences as well as requiring renewable electricity mandates that require a specified amount of electricity to be generated from qualified renewable sources like wind and solar.

While attempting to create more alternative energy sources is a laudable goal, doing it in this manner is clearly wasteful and worthless.