Republicans Passed The Most Dangerous Bill, To Reform Abusive US Regulations 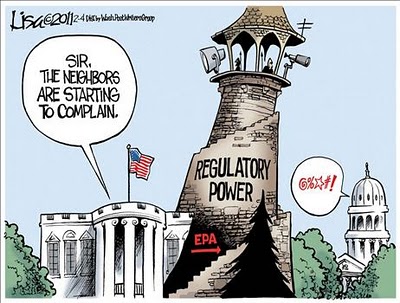 (Reuters[2]) Republicans on Wednesday passed a bill in the House of Representatives that touched on nearly every step U.S. agencies take in creating and applying new rules, continuing their blitz to radically reform “abusive” federal regulation of areas from the environment to the workplace.

In a 238-183 vote, the House passed the “Regulatory Accountability Act,” which combined eight bills aimed at changing how the vast government bureaucracy runs. Only five Democrats voted for it.

The legislation would give President-elect Donald Trump tools “to wipe out abusive regulation,” said Bob Goodlatte, the Judiciary Committee chairman who is among the many House leaders calling for lighter regulation and saying the costs to comply with federal rules are too high.

Republicans say there is little accountability for regulations that apply to almost every aspect of American life because they are created by appointed officials and not elected representatives. Federal agencies operate either independently or under the president’s authority.

Democrats are very much against any reform, part of which is slowing down the Executive Office rule making from unaccountable bureaucrats, leading to this bit of nuttiness from EcoWatch’s Carl Pope

Last, week, under the cover of a media bliss-out except among Koch funded right-wing channels, the House of Representatives passed a bill which would effectively repeal future standard setting under every important environmental, public health, consumer protection, labor standards, occupational safety and civil rights law on the books.

The bill, called the REINS Act, requires that any future major regulation adopted by an Executive Agency—say a new toxic chemical standard required by the recently enacted Chemical Safety Act, or a new consumer protection rule about some innovative but untested kind of food additive—must be approved by a specific resolution in each House of Congress within 70 days to take effect.

Mention of Koch? Check. Anyhow, what is wrong with requiring the duly elected Legislative branch to approve or disapprove of major and minor rules (focusing mostly on major ones) that have an impact on the lives of Americans? We didn’t elect those bureaucrats, now, did we? Which is more “dangerous”: involving Congress, or letting unelected partisans run roughshod over the public?

To give a sense of the scale of this road-block, in 2015 there were 43 such major federal[4] regulations passed to protect the public; among them were food safety regulations, the Clean Power Plan regulating pollution from electrical generating facilities, net neutrality rules protecting the internet from monopoly, restrictions on predatory lending and energy efficiency standards for appliances.

And those are exactly why the REINS Act is needed. The CPP will raise consumer costs. Net neutrality increases government involvement in our browsing. Energy efficiency raises our costs because it was about greenhouse gases, nothing else.

It’s time—past time—for a massive mobilization to make clear to Congress and the new President that a wholesale repeal of 40 years of progress in environmental protection, civil rights, labor standards, health and safety and consumer protection is a third rail, and that pretending that the REINS act increases accountability is a fig-leaf that public scrutiny must shred.

Ask your favorite public interest organization what it is doing today to stop the REINS Act in the Senate.

If Democrats are protesting this much, the bill must be a good one. The summary of the REINS Act starts out

The bill revises provisions relating to congressional review of agency rulemaking. A federal agency promulgating a rule must publish information about the rule in the Federal Register and include in its report to Congress and to the Government Accountability Office: (1) a classification of the rule as a major or non-major rule, and (2) a copy of the cost-benefit analysis of the rule that includes an analysis of any jobs added or lost.

A “major rule” is any rule that the Office of Information and Regulatory Affairs of the Office of Management and Budget finds results in: (1) an annual effect on the economy of $100 million or more; (2) a major increase in costs or prices for consumers, individual industries, government agencies, or geographic regions; or (3) significant adverse effects on competition, employment, investment, productivity, innovation, or the ability of U.S.-based enterprises to compete with foreign-based enterprises.

That seems a pretty darned good rationale for the Legislative Branch to have input, does it not? Of course, if Congress would stop passing laws that are overly broad and allow so much rule making, that would certainly be a bonus.

Of course, this has to make it through the Senate, and Democrats will surely object to involving themselves in rules that have a heavy impact on Citizens.