Moonbats, prepare yourselves for heartbreak. Seattle’s bike share program has passed away:

The program, known as “Pronto,” was launched in October 2014, costing $4.4 million (including $1.75 million in state and federal taxpayers’ money). From the start, there was fanfare and hype, with promises of widespread use of the bike sharing program — despite our hills and rainy weather.

When Pronto ridership proved to be far below projections, Transportation Director Scott Kubly urged the city to take over the program. So the city council voted to buy Pronto, wasting another $1.4 million of the people’s money. For a year, under city ownership, the program continued to fail.

Where you have moronic programs run by a bloated government, you have corruption. Turns out Kubly used to be the president of the company that operated Pronto. He was fined $10,000 for this ethics violation. No worries though; he can afford it, since he still has his cushy government job.

Now, the Seattle DOT will spend the next two weeks dismantling the 54 bike sharing stations. The program’s 500 bicycles? They might be sold at a loss to another city, but so far, no takers.

With the free market, ideas have to be sensible or it is difficult to raise the money to implement them. With Big Government, ideas only have to be moonbatty. When they fail, taxpayers are forced to pick up the tab. 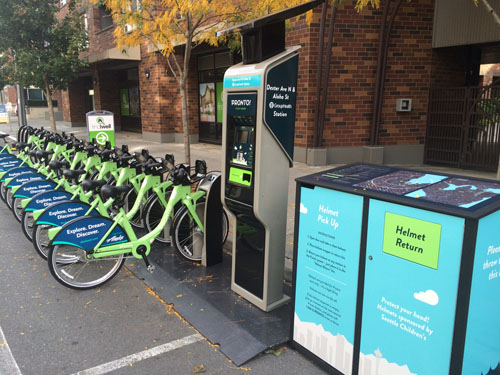 On a tip from Becky in Washington. Cross-posted at Moonbattery.