Thanks to an overreaching federal government, the American public will soon be forced to purchase a product that’s severely overpriced, hazardous to our health and doesn’t live up to all its hype – and I’m not talking about Obamacare. 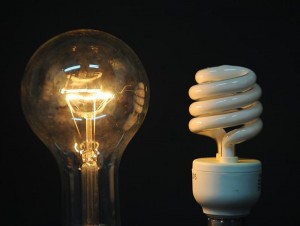 [1]We now have a mere six shopping days left to stock up on a product Americans have relied on for their general household lighting needs almost since its perfection by Thomas Edison 134 years ago – the incandescent bulb. On Jan. 1, it will go the way of the dodo bird.

On Jan. 1, 2012, the manufacture and importation of 100-watt incandescent bulbs were discontinued. A year later, the 75-watt version was put out to pasture, too. 2014 will mark the bulb’s final phase-out – no more 40- or 60-watt bulbs. In their place, we’ll be forced to use either the squiggly-looking compact fluorescent light bulbs or LED lights, according to: The Wichita Eagle.

I actually gave the fluorescent bulbs a try a few years ago. I needed a 75-watt bulb and picked out a very expensive GE “Energy Smart” 75, with disappointing results. That’s when I read the fine print.

Not only did the light lack intensity, it’s quality was lousy. Instead of the warm, full-spectrum glow we’ve all become accustomed to, it cast those in its weak glow in a ghastly pallor straight from “Night of the Living Dead.”

That’s when I read the really fine print. If you break one – and who among us hasn’t broken a light bulb – you’re cautioned to retreat from the premises immediately and do everything short of calling in the hazmat team. That’s because they’re packed with mercury.

Even worse, it now appears that the bulbs are hazardous to our health, even if they’re not broken.

Germany’s ALAB Laboratory, based in Berlin, discovered two years ago that the bulbs emit carcinogens when turned on, especially for extended periods of time, according to: The Telegraph.

“For such carcinogenic substances, it is important they are kept as far away as possible from the human environment,” Peter Braun, who carried out the tests, told the British newspaper. “I, therefore, use them only very economically. They should not be used in unventilated areas and definitely not in the proximity of the head.”

In other words, don’t use them to settle down with a good book. That last chapter may kill you.

Incidentally, the package of that overpriced 20-watt GE “Energy Smart” bulb claimed it “lasts 5 years.” Apparently, that’s only true if you never actually turn it on. Within five months, I was giving it last rites.

That’s when I gave LEDs a try. I bought an inexpensive desk lamp with about 30 tiny light-emitting diodes to illuminate my computer keyboard. Within a few weeks, it turned into a cross between an emergency strobe light and a ‘70s disco ball, with each of the diodes flashing on and off in no particular order. It drove me and my eyes nuts.

When I returned the lamp to the store, I was told my complaint was pretty common.

So Jan. 1 is it, folks. There are some exceptions to the ban, according to The Wichita Eagle, including three-way bulbs, appliance bulbs, grow lights, black lights, yellow bug lights and infrared lamps.

With that, I wish everyone a Merry Christmas, and may your days be merry and, most of all, bright.