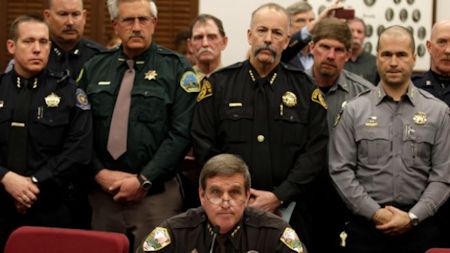 Fifty-five of the state’s 62 sheriffs are saying the ban on: magazines with over 15 rounds: and the: universal background check: requirement are unconstitutional, too vague and, therefore, unenforceable, according to: The Washington Times.

The problem with the magazine limit, they say, is that the legal ones purchased before the law’s July 1 effective date look identical to those purchased later.

“How is a deputy or an officer supposed to know which is which?” Weld County Sheriff John Cooke asked at a press conference, according to: Breitbart News.

The 55 sheriffs filed a federal lawsuit to toss out the laws as unconstitutional. But U.S. District Judge Marcia Kreiger found the lawmen lacked standing to litigate their claims.

But that didn’t end the lawsuit. The Times reported:

Twenty-one other plaintiffs who do have standing are continuing their suit, The Daily Mail reported. These plaintiffs are not affiliated with any government agency, but rather individuals or members of private gun groups.

It’s not yet clear whether the sheriffs will join the suit on an individual basis.

After Colorado passed its gun control laws, two state senators, including the Senate president, lost their seats in a September recall election, and a third resigned during a subsequent recall effort.

Colorado isn’t alone. Sheriff’s associations in at least 18 states, including Florida, and hundreds of police chiefs have vowed not to enforce any new federal gun control legislation or presidential executive orders, according to a list compiled by: Conservative Angle.