Taya Kyle, widow of the most lethal sniper in American history, Chris Kyle, likely just made her husband proud. She took on the reigning NRA champion in a charity shootout — and won. 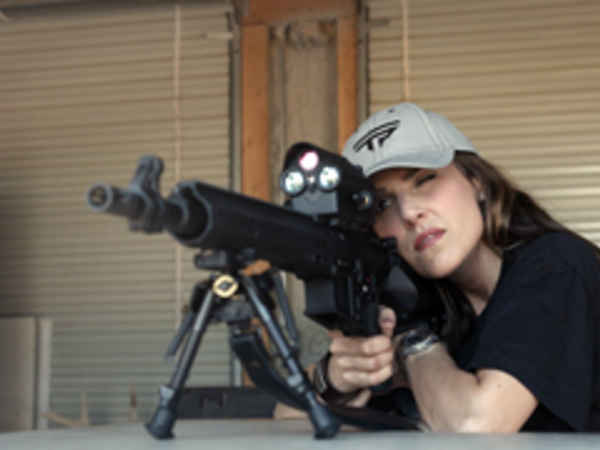 The widow of Navy SEAL sharpshooter Chris Kyle likely would have made her late husband proud by winning the ‘American Sniper Shootout’ charity event that was named after him on Saturday.

The inexperienced markswoman used the computer-equipped M600 and M800 rifles with precision-guiding technology that were made by TrackingPoint to defeat Piatt, Fox News reported.

The rifles, which were developed with input from Kyle’s husband, all feature ‘RapidLok Target Acquisition’ technology that automatically will acquire and track a target while the trigger is pulled.

The company was so confident she would defeat Piatt, who competed with the M4A1, M110, and M2010 military rifles, that they offered to pay him $1million if he was able to win the contest.

In addition to help her raise money for charity, Kyle also thinks the technology could help save lives.

She said: ‘Our first responders and military members regularly face situations most of us cannot imagine.

‘They need every advantage for precision and efficiency to protect and serve while minimizing collateral damage and risk to themselves.

‘[The technology] would have saved lives of friends we have lost and will save life and/or limb of those who put it all on the line for the 99% of us they choose to give their life for.’

It says a lot that Taya was not only about to outshoot the world champion, but she was able to shoot at 100%. It sounds like she might have a good point — why are our troops not shooting with these weapons, if they’re so superior?