It’s easy for Democrats to advocate for gun control when they have armed bodyguards to protect them, even if the right to bear arms is constitutionally protected. Now, a video from February, mostly unnoticed until now, is getting attention thanks to the crowd-pleasing passionate speech from Army veteran and chaplain Nicholas Purpura. 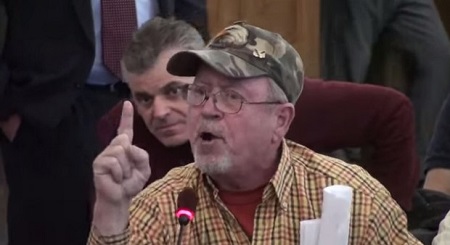 He told the lawmakers they are “hypocrites” who should be removed from office and “guilty” of leaving citizens defenseless.

“Make a law if you use a gun in a crime there is no probation, they don’t plea bargain them out,” Purpura continued, his voice raising in volume. “You are guilty for the blood of innocent people and the children… [it’s] on every one of your heads.”

“Tell me once how that would have stopped that psychopath?” he added, seemingly referring to Newtown shooter Adam Lanza. “We should throw every one of you out of office if you continue this lunacy. Bring us back to sanity. We are American citizens. Read the Constitution.”

For the second time, the crowd responded with load applause.

It sounds nice, that banning guns will end all gun violence. But unfortunately, the truth is the exact opposite, and Purpura is right. The drastically higher crime rates in cities with strict gun control laws is on the hands of Democrat lawmakers seeking to deprive Americans of their constitutionally protected rights.