There were generally two reactions to the Newtown shooting: people who wanted more gun-free zones and harsher gun control laws, and people who realized that gun control and gun-free zones only made law-abiding citizens helpless victims completely incapable to defend themselves. Recognizing the common-sense notion that people who don’t break laws shouldn’t be at the mercy of people who completely ignore them, Georgia Governor Nathan Deal just signed into law what the NRA is calling “the most comprehensive pro-gun bill in state history”. 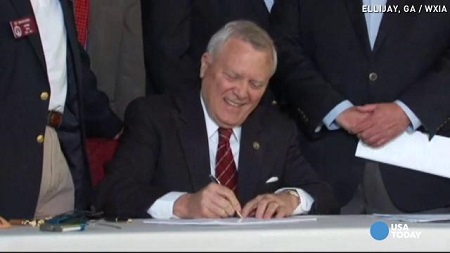 Georgia Gov. Nathan Deal signed into law Wednesday a bill that expands gun rights in the state to allow weapons in government buildings, bars, places of worship, and school zones under certain circumstances.

Under House Bill 60, also known as the Safe Carry Protection Act of 2014, school districts will get to decide whether to allow authorized personnel to carry weapons within school safety zones under certain circumstances.

In addition, church leaders will be able to decide whether to allow licensed gun owners to bring weapons into their place of worship. The law also removes fingerprinting requirements for renewal licenses.

Anti-gun advocates are calling this an example of the gun lobby advancing their “extreme agenda” at the expense of safety, but that kind of thinking is just idiotic. Gun-free zones just penalizes law-abiding citizens whose second amendment rights allow them to own guns — and after all, if some violent maniac ever shows up in a gun-free zone, we all know that the first person the anti-gun activists are going to be looking for is someone to defend them with a gun.