Just when you think the anti-gun hysteria in America can’t get any worse, someone finds a way to take it to the next level. Believe it or not, eight Manassas, VA police officers were asked to leave Buffalo Wild Wings because of their guns. The plain clothes officers showed their badges in hopes of clearing up the misunderstanding, but were told Buffalo Wild Wings is a “gun free zone.” At that point, they were refused service and told to leave. 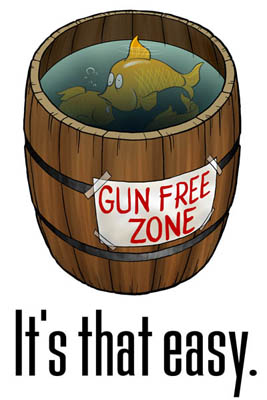 After the story became public, the general manager of that Buffalo Wild Wings location called the incident a “huge misunderstanding” and apologized to the police department.

“There is no reason why those officers should have been asked to leave…police officers are always welcome in my establishment and even though we do have a no gun policy, as a company that excludes off duty police officer. As a company we are community oriented. We appreciate everything that police officers do for us.”

If there’s one thing this proves, it’s that “gun free zones” are a joke. All eight of these police officers carried weapons inside of the “gun free zone” at Buffalo Wild Wings. Yet, when they were asked to leave, they did so peaceably, which is an indication that they were exactly the sort of people you wouldn’t have to worry about with guns. However, if they had been thugs or a gang of Adam Lanzas bent on killing people, what good would the “gun free zone” have done? None at all. So, the only thing a “gun free zone” is good for is clearing “good guys with guns” from an area so the “bad guys with guns” know it’s safe to go there to hurt people.