Customers to Restaurant: If My Gun Isn’t Welcome, Neither is My Money

Gun-free zones may very well be the stupidest idea ever created; businesses might as well post a sign that says, “Come rob me, I won’t fight back!” And when one Georgia business had the bright idea to tell their customers they couldn’t bring guns into their restaurant, they quickly learned just how dumb a decision that was. 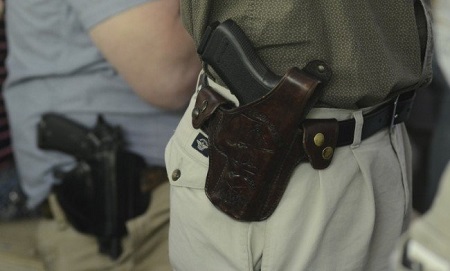 A new Georgia law gives bars, churches, and schools the right to choose if guns can come in or not, and when one business said no, opponents spoke out on Facebook.

… “I come up and see a sign on your door that says you don’t allow weapons, I’m going to honor your sign, but then I’m also not going to come into your establishment,” that’s how Jennifer Seymour feels about a no gun rule that was recently reversed by T-Bonz steakhouse.

“It’s a matter of that it’s not convenient for me to take my gun off to come in an eat, so I’m not going to do that,” she told News 12, as she loaded her gun up.

Some took it a step further and wrote on Facebook how they weren’t coming back either. Seymour didn’t chime in on social media, but did email T-Bonz Steakhouse.

“They also sent me a personal email back saying that they had taken the sign down and re-thought things,” she told News 12.

You mean, criminals aren’t going to pay attention to a sign posted on a door telling them not to bring guns in?! It’s almost as if people who break the law have no concern for other people’s homes, businesses, and valuables! Oh, wait…