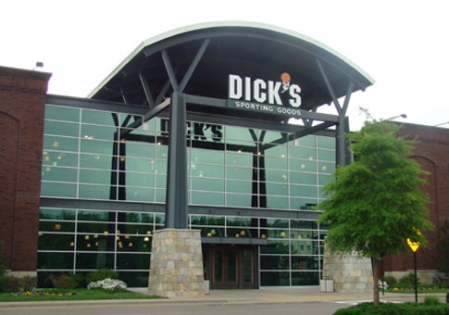 Last Christmas many Dick’s customers were sent one mean lump of coal in the form of a gift certificate. All customers who pre-ordered a Troy Carbine from Dick’s for their Black Friday special had their orders cancelled and their money returned.

Following the Newtown shooting spree, Dick’s Sporting Goods changed their policy and stopped selling AR-pattern and other semi-automatic, magazine-fed rifles, even the guns they had already sold.

If there’s a silver lining for all the people who were eagerly waiting for that Troy Carbine and were vastly disappointed, it’s that Dick’s isn’t doing so well in the financial department.

At a time where the only thing a company has to do to sell firearms, ammo and accessories is to unlock their doors, Dick’s sales have flat-lined. In fact, their sales dropped 2.2 percent in the fourth quarter of 2012 compared to 2011 and their shares 10 percent in the last quarter.

…Dick’s denied that their sales were low because of the store’s gun policy, instead they pointed the finger at the ammunition shortage.

But other sporting goods stores are not feeling the pinch despite the ammo drought. In fact, Cabela’s is doing better than ever and investors have been quick to point out that it’s because of their strong gun sales.

“Cabela’s Inc. stock closed up more than 16 percent, among leading gainers on the New York Stock Exchange, and hit a 52-week high Thursday after reporting strong financial results above the market’s and the company’s expectations.”

Gun sales accounted for almost two-thirds of Cabela’s gains, with their sales up by 24 percent over last year.

At a time when gun prices are shooting into the stratosphere because there’s so much demand, how dumb is it to decide that’s the time to stop selling popular firearms? It’s like selling tickets to football games and deciding you’d rather do something else two weeks before the Super Bowl. It would have been better if Dick’s Sporting Goods would have just continued to look out for its customers, but if the company won’t set a good example, then maybe other companies can learn from the money Dick’s lost because it decided to be a bad example.