It’s ironic that feminists rail against rape (and rightfully so, even if they do fudge the statistics a little bit) while simultaneously decrying the ownership of guns. What they fail to realize is a lot of rape survivors have armed themselves in case they are victimized again, or their rapist returns.

But progressives want to make it difficult for women like that (and women like myself who want to prevent anything like that from ever happening) to acquire a firearm and mock those of us who have them by chanting ridiculous slogans like “c*cks not glocks” and waving around sex toys. 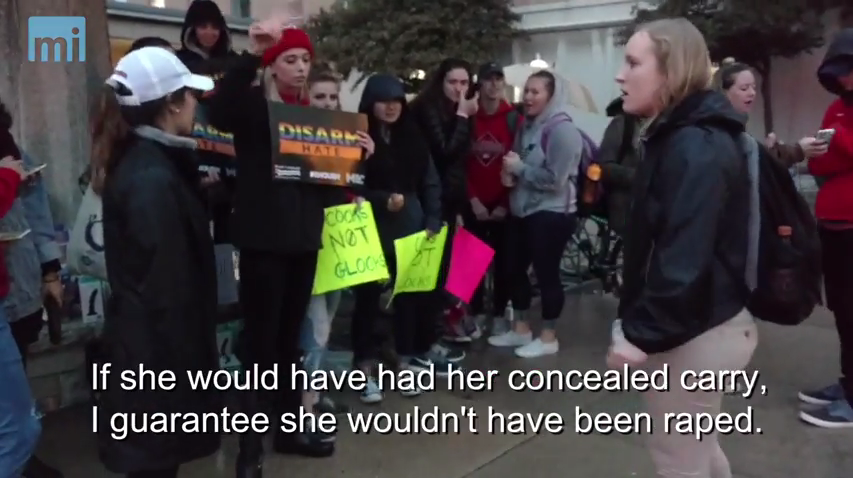 When a group of campus feminists decided to rally against firearms, a student decided to school them on exactly why someone might own a gun and they had no response as a result.

It turns out that the guns they hate are a solution to the problem of women being sexually victimized. Of course, this is something they don’t want to acknowledge, because they don’t have any interest in coming up with solutions to the problems they complain about. No, whining and writing up catchy chants are much more interesting.

After being told that a woman had a friend who was raped and wasn’t allowed to defend herself because she could not carry a weapon on campus, the mindless warts ignored her and began to wave their sex toys around saying “this is what democracy looks like.”

(In case anyone from outside the United States is reading this, this is NOT what democracy looks like.)

So, they DO want women to be raped, so that they can complain about it. That’s what I’m getting from this. Because arming women would be to expect them to take their safety in their own hands and then what would feminists be able to protest about?

Listen, ladies, can I call you ladies? (No, I’m seriously asking.) You can shake your sex toys and protest the Second Amendment, but after you’re raped, you’re going to call a man with a gun to go find the man who victimized you. Why not cut out the middle man and learn how to protect yourself? Or do you just want to be able to complain about men?