While recent events in Ferguson, MO have triggered nationwide discussions about race relations and the militarization of local police forces across America, the riots and looting that have been ongoing in Ferguson have highlighted another issue that should not be ignored amid the turmoil: the importance of private gun ownership in America.

While looters were tearing apart businesses in Ferguson at night, photos emerged of men carrying AR and AK rifles – those scary “assault weapons” the politicians are always prattling on about – to defend their businesses.:  One of the most prevalent photos shows men standing outside a gun shop and the tattoo parlor next door…and while those businesses were intact, the Dollar General across the street had been devastated by looters. 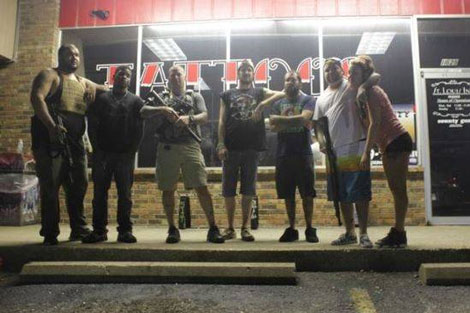 It is very reminiscent of the LA riots that followed the Rodney King beating, when Korean business owners were left with no choice but to defend their businesses, as the police had largely abandoned Koreatown.

And that really is the crux of it – in times of widespread civil unrest, law-abiding Americans can’t trust that law enforcement will be there to protect their homes, families, and businesses from rioters and looters.:  No matter how militarized America’s police forces become, in the end it is up to the people of America to ensure that their property is kept safe.

This is also where those inane arguments about how many rounds you “need” in your magazine come in to play.:  I may not “need” 30 rounds in my AR on a regular day, but if maurading bands of thugs come looking to break into my home or business, a standard capacity magazine could be the difference between life and death.:  And don’t even get me started on the “bullet button” nonsense here in California.

As much as the Left would like to live in their utopia where only the police have guns, when it really hits the fan, the authorities likely won’t be there until after the damage is done.:  In times like these, gun ownership very well could be the difference between life and death, and law-abiding Americans don’t need elitist politicians tying our hands when it comes to defending our homes and our businesses.