You very rarely hear stories about how good guys with guns defend law-abiding folks from bad guys with guns, though those stories are actually quite common. Instead, you’ll hear the worn-out narrative about how having a gun exposes one to inordinate amounts of danger and criminals are more likely to take the weapon away from its owner and kill him or her with it.

That didn’t seem to happen in Waterbury, Connecticut over the weekend when a cafe’ patron with a gun shot and killed a man trying to rob the place[1]… 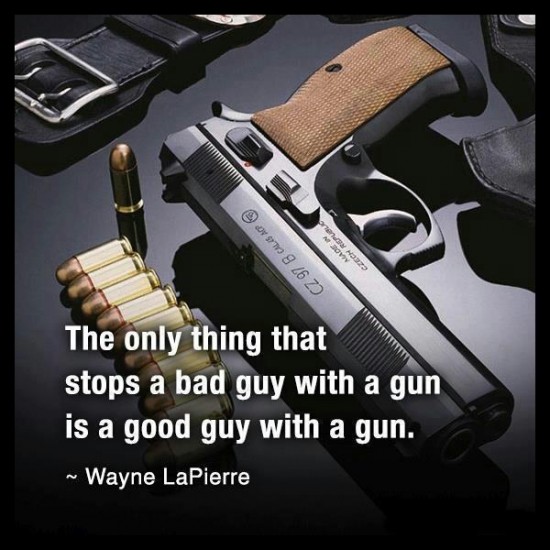 According to NBC Connecticut[3], police spoke with witnesses who said “the would-be robber had come into the cafe wielding a gun and tried to steal from the business and the customers.” A patron who was “carrying a legally registered handgun confronted the suspect and fired his gun at least once, fatally shooting the man.”

Police took the patron’s handgun and “aren’t releasing his name” until the investigation into the shooting is over. No charges have been filed against the armed citizen.

A uniformed officer who responded to calls of “shots fired” at the restaurant said, “It says something about firearms, for good people with firearms being in the right hands.” And a Waffle House employee who was at the restaurant when the alleged robbery was attempted said the concealed permit holder saved lives. According to The Post and Courier[5], the employee said, “He saved us, that’s what he did.”

The problem with a gun-free zone is that not only are there no good guys with guns, but it’s proudly advertised to those who would shoot the place up that there won’t be any armed opposition.