Gun Control leads to death of man protecting his wife 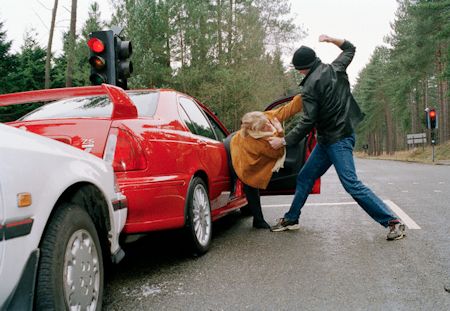 Dustin Friedland, 30, was a Hoboken lawyer out shopping for Christmas presents with his wife, 27 year old Jamie. : Upon returning to their Range Rover the couple loaded up their vehicle with their gifts and Dustin, ever the gentlemen and loving husband opened the door for his wife and let her in first.

Dustin then moved around the car to get in the driver’s side door.

It was at this time he was approached by two men looking to carjack him.

With his wife in the car Dustin’s instincts moved to protect her…but he is in New Jersey.

A restrictive may-issue state where only those specifically employed in security work or can produce a : ”justifiable need” can get a permit to carry a firearm. : As I stated, Dustin was a lawyer from Hoboken; if he were to claim he wanted to carry a firearm in order to protect his wife from carjackers the police, who rarely bestow a CCW to anyone, would have laughed him out of the station.

You know…because unless someone threatens you well in advance, nothing bad will EVER happen that would require you to have a firearm.

Of course, the two thugs who were doing the car jacking couldn’t care less about the draconian gun laws in New Jersey because: THEY’RE CRIMINALS: and if they aren’t going to follow the law about not carjacking and murdering people why would they give a damn about carrying a gun without a permit?

It is at this point that the story turns to its inevitable tragic conclusion. : In a bid to protect his wife, Dustin, forcibly unarmed thanks to the gun control policies of the state of New Jersey, is gunned down in front of her.

Jamie was then forced out of the Range Rover at gunpoint but fortunately was not physically harmed though I’ve no doubt the scars she will carry within shall pain her more than any injury.

And what did the two bottom feeders get out of this? : A joyride in a car that was recovered not 10 miles away.

Jaime’s uncle, Dr. Mark Schare, forewent any notion of political correctness in his views of what should happen to the 2 murderers:

“I want them dead. : In a heartbeat, I would like to see them dead because of what they did. And for what? What did they gain?: It’s just evil. They should not have a day of peace, ever again.”

This post was used with the permission of Joe For America[2].