Home Intruder Starts Crying Like A Baby, After 11 Yr-Old Boy Does THIS! [VIDEO]

They train them young and right in Talladega, Alabama.[1] An intruder broke into a home that he had robbed previously. An 11 year-old boy named Chris Gaither was home alone when the guy broke in. The guy said he’d kill the kid and cursed him. The boy pulled out a 9mm handgun, which evidently, the criminal thought was a toy because he just kept on walking. He stole a hamper and started to leave when the kid started firing. He fired 12 shots. All missed but the last one. As the thief was crawling over the fence, the 12th shot hit gold. It went through the hamper and into the guy’s leg. He started crying like a baby. Guess he should have taken the kid seriously. Fresh out of sympathy here. 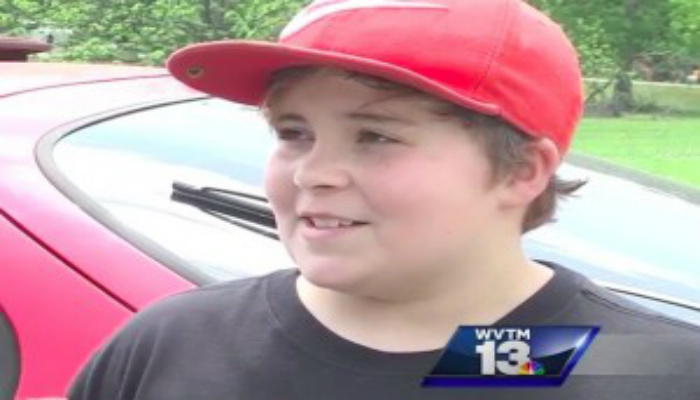 Chris Gaither was alone when a man broke into his Talladega, Alabama, home. The boy, who toldWVTM-TV[3] that his stepfather taught him how to use a firearm, rushed to grab a 9mm handgun and warned the criminal of his intent to use the weapon. “I told him I was going to kill him if he didn’t get out of my house,” Gaither said.

“When he was coming down the stairs, that’s when he told me he was going to kill me, f-you and all that,” Gaither added.

The intruder got past the boy and attempted to flee the property as Chris started shooting. Gaither’s first 11 shots missed. However, his last shot hit it’s target

“It was a full metal jacket bullet. It went straight through the back of his leg. He started crying like a little baby,” said the smiling youngster.

Police have not released the identity of the alleged intruder.

Chris’ stepfather taught him how to shoot. They practice with zombie targets. Guess he’ll need a bit more practice, but he got the job done right and proper. The guy was warned: “I told him I was going to kill him if he didn’t get out of my house,” Gaither said. The robber is lucky he’s not dead… if Chris had been a better shot he would have been. “When he was coming down the stairs, that’s when he told me he was going to kill me, f-you and all that,” Gaither added. Although they haven’t released the identity of the intruder, it is someone who has robbed them before. This is not someone the family knows, but I doubt he’ll be back after he gets out. And maybe bad guys will think twice about barging into that particular house. This kid did the right thing and I’m glad he had a gun handy. It could have been a lot worse.