Hundreds Of DHS Armored Trucks Are On The Move. Should You Be Freaking Out?

At first glance, it does seem more than a bit strange that the government is buying truly massive amounts of ammunition, body armor and military style vehicles. That’s why even members of Congress like Tim Huelskamp (R-Kan.) and Doug LaMalfa (R-Kan.) have become concerned enough to publicly request that the DHS explain itself. 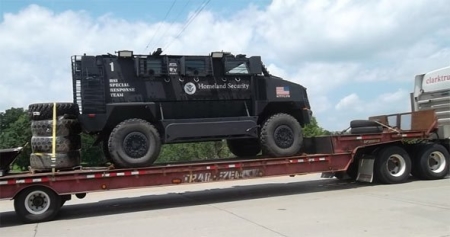 That’s a responsible position to take.

But, could there be a legitimate explanation for all of these weapons purchases?

When you keep in mind how massive the federal government has become and the possibility that it could save money by buying in bulk, it’s easy to imagine some mindbogglingly large ammo and armored truck purchases. For example 450 million rounds purchased by the Department of Homeland Security comes out to a little less than 7,000 rounds per agent. Over the course of five years, could its agents fire off that many rounds keeping sharp? Conceivably, yes.

Still, when a government that is working to disarm its citizenry is stockpiling ammunition and armored vehicles, it’s wise for the American people to keep a close eye on what’s happening. It’s also smart for Republican members of Congress to let everyone know that they’re aware of the situation and keeping an eye on it.

That’s not paranoia; it’s due diligence.