In Act Of Civil Disobedience, Vast Majority Of Gun Owners In Connecticut Refuse To Follow Law Requiring Them To Register Weapons

Connecticut has taken the first step towards confiscating guns by demanding that owners of assault weapons register them with the state. In the process, it’s: created hundreds of thousands of outlaws because the majority of the state’s gun owners are simply refusing to comply[1]. 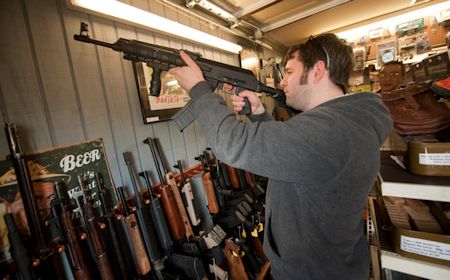 Everyone knew there would be some gun owners flouting the law that legislators hurriedly passed last April, requiring residents to register all military-style rifles with state police by Dec. 31.

But few thought the figures would be this bad.

By the end of 2013, state police had received 47,916 applications for assault weapons certificates, Lt. Paul Vance said. An additional 2,100 that were incomplete could still come in.

…That 50,000 figure could be as little as 15 percent of the rifles classified as assault weapons owned by Connecticut residents, according to estimates by people in the industry, including the Newtown-based National Shooting Sports Foundation. No one has anything close to definitive figures, but the most conservative estimates place the number of unregistered assault weapons well above 50,000, and perhaps as high as 350,000.

And that means as of Jan. 1, Connecticut has very likely created tens of thousands of newly minted criminals – perhaps 100,000 people, almost certainly at least 20,000 – who have broken no other laws. By owning unregistered guns defined as assault weapons, all of them are committing Class D felonies.

“I honestly thought from my own standpoint that the vast majority would register,” said Sen. Tony Guglielmo, R-Stafford, the ranking GOP senator on the legislature’s public safety committee. “If you pass laws that people have no respect for and they don’t follow them, then you have a real problem.”

The problem could explode if Connecticut officials decide to compare the list of people who underwent background checks to buy military-style rifles in the past, to the list of those who registered in 2013. Do they still own those guns? The state might want to know.

…An aggressive hunt isn’t going to happen, Lawlor said, but even the idea of letters is a scary thought considering thousands of people are now in an uncomfortable position. At the least, the legislature should reopen the registration period this year with an outreach campaign designed to boost the numbers.

It could be a tough sell. On Thursday night, Guglielmo heard from a constituent at a meeting in Ashford, who said most of his friends with military-style rifles such as AR-15s had not come forward.

“He made the analogy to prohibition,” Guglielmo said. “I said, ‘You’re talking about civil disobedience, and he said ‘Yes.’ “

All I can say about this is that if I were on a jury deciding a case brought against a man defying this law, he’d walk into that courtroom knowing that when everything was said and done, he’d walk out a free man.