Joe Biden Threatens On Gun Control Measures: ‘Let Me Say This As Clearly As I Can, This Is Just The Beginning’

“You got into these small towns in Pennsylvania and, like a lot of small towns in the Midwest, the jobs have been gone now for 25 years and nothing’s replaced them. And they fell through the Clinton Administration, and the Bush Administration, and each successive administration has said that somehow these communities are gonna regenerate and they have not. And it’s not surprising then they get bitter, they cling to guns or religion or antipathy to people who aren’t like them or anti-immigrant sentiment or anti-trade sentiment as a way to explain their frustrations.” – Barack Obama

“I believe in keeping guns out of our inner cities, and that our leaders must say so in the face of the gun manufacturer’s lobby.” – Barack Obama

No matter how loudly law abiding gun owners demand to have their 2nd Amendment rights respected, the Democrats refuse to listen. They want your guns and they’re willing to use any excuse to curtail your constitutional rights. 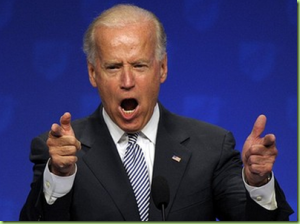 Joe Biden made that clear yesterday on a conference call with Michael Bloomberg’s Mayors Against Illegal Guns. Joe Biden reassured the group that the Obama administration was committed to fighting for gun control. “Let me say this as clearly as I can: this is just the beginning,” Biden said.

Biden also crowed about the possibility that background checks, which could very well lead to a national gun registry, could be about to make it through the Senate, “I think we’re on the verge of getting a serious thorough universal background check system in place.”

Once the government has a record of every gun that’s purchased, the politicians have a list they can use if they ever decide to try to confiscate every gun in America, which has long been a goal near and dear to the heart of liberal politicians.

Don’t kid yourself; Politicians like Joe Biden will say anything, exploit any tragedy, and use any excuse to curtail your 2nd Amendment rights.