The tolerance of the left is legendary. In my Pacific Northwest scenic paradise, I have encountered firsthand the low-grade fascism that passes for “tolerance” on the left. My liberal alma mater is a scenic slice of hell where students are afforded the opportunity to pay thousands to learn that straight, white males are evil and progressivism is the only way forward for a society that desperately needs to evolve.

The left has made much ado about the word “tolerance,” but has failed to live up the true meaning of the word. Liberals, by-and-large, do not wish for a coexistence with those with whom they disagree (despite what their “coexist” bumper stickers suggest). No, liberals do not seek an agreement to live and let live; we must see things their way or otherwise be punished. 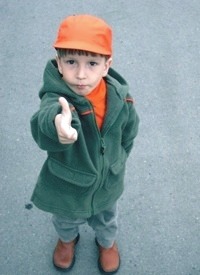 [1] Keeping with my promise[2] to advertise the ludicrous world which the left is trying to create for the next generation, I would like to share the latest and greatest ridiculousness to come out of the war on children with regards to gun rights.

A Maryland sixth grader has been suspended for- wait for it- merely saying the word “gun.”

Bruce Henkelman’s 11-year-old son was recently suspended for ten days for discussing the shooting at Newtown. Acknowledging the horror of the tragedy was, evidently, enough to get the boy thrown out of school for ten days.[3]

Bruce Henkelman of Huntingtown says his son, a sixth grader at Northern Middle School in Owings, was talking with friends about the Sandy Hook Elementary School massacre when the bus driver hauled him back to school to be questioned by the principal, Darrel Prioleau.

“The principal told me that with what happened at Sandy Hook if you say the word ‘gun’ in my school you are going to get suspended for 10 days,” Henkelman said in an interview with WMAL.com.

So what did the boy say?:  According to his father, he neither threatened nor bullied anyone.

“He said, I wish I had a gun to protect everyone. He wanted to defeat the bad guys. That’s the context of what he said,” Henkelman said. “He wanted to be the hero.”

The boy was questioned by the principal and a sheriff’s deputy, who also wanted to search the family home without a warrant, Henkelman said. “He started asking me questions about if I have firearms, and [the deputy said] he’s going to have to search my house.:  Search my house?:  I just wanted to know what happened.”

No search was performed, and the deputy left Henkelman’s home after the father answered questions in a four-page questionnaire issued by the Sheriff’s Office.

Apparently, in Maryland, mentioning the word “gun” is enough to solicit an unreasonable demand to search a private residence…. But no, the “war on the Second Amendment” is just a figment of the evil gun-lobbies imaginations.

I’ll be honest with you- I carry a gun not only for my own protection but for the protection of others as well. I hope society can get along just fine without my help, but if given the choice between allowing a massacre to occur and me drawing my weapon, I would happily do what I can to use my firearm as a LIFESAVING tool and put the gunman down.

This is what we are up against; in this battle to preserve gun rights, we are not merely looking to keep our hunting rifles. We need to remember that this war against our Second Amendment rights is happening on a legislative level AND a cultural level. The left is working to demonize firearms and make them taboo and an unmentionable subject so that the attempts to restrict our rights are made all the easier in the decades to come.

That is why we need to shout our contempt from the rooftops over these unconscionable manipulations that are occurring in the re-education camps schools.