Maduro Arms Supporters, Having Confiscated Guns From Everyone Else

Venezuela is an object lesson not only in applied socialism, but also in the key role gun control plays in tyranny:

The socialist leader of Venezuela announced in a speech to regime loyalists his plan to arm hundreds of thousands of supporters after a years-long campaign to confiscate civilian-owned guns.

“A gun for every militiaman!” Venezuelan president Nicolas Maduro said to uniformed militia members outside the presidential palace, Fox News reported on Tuesday. The Bolivarian militias, created by Maduro’s predecessor Hugo Chavez, already number in the hundreds of thousands and are being used to supplement the regime’s armed forces. …

The arming of Maduro’s supporters comes five years after Venezuela’s socialist regime outlawed the commercial sale and civilian ownership of firearms. Only the military, police, and groups like security companies can buy guns and only directly from one state-run arms company under the law passed in 2012, according to the BBC. The country recently doubled down on its gun ban through a combination of gun buybacks and confiscations in the summer of 2016.

At least three people were killed in Venezuela when clashes broke out during anti-government protests described by opposition leaders as the “mother of all marches.” …

An hour into the march in Caracas, a 17-year-old boy was shot in the head, according to the Venezuela’s public ministry, which said it had started investigating the incident. The teenager, later identified as Carlos Moreno, died while undergoing surgery, a hospital representative told CNN. …

There are a lot more angry, desperate Venezuelans than there are servants of the Maduro regime. Yet it appears the kill ratio is still in Big Government’s favor, thanks to gun control. 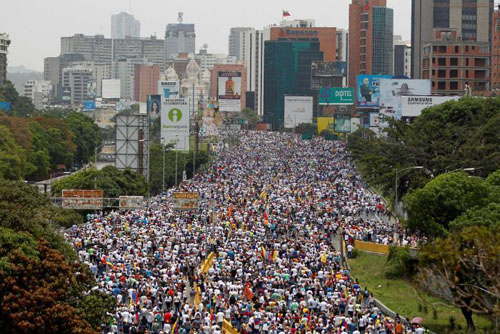 If armed, they could depose Maduro and start eating again.

On tips from J, Lyle, and Torcer. Cross-posted at Moonbattery.