Obama Gets BAD News About Guns

It has become increasingly obvious that Obama’s efforts to squash the Second Amendment have failed.

New reports reveal that gun sales are at a record high for the sixth month in a row.

The level of FBI firearm related background checks in October again hit a record high, indicating that Americans have been buying firearms at all time highs for six months in a row now.

The FBI released October’s figures[2], showing that it carried out 1,976,759 Instant Background Checks. This makes it the sixth consecutive month to see a record number of checks.

It also constitutes a a 373,290 increase in checks on figures from this time last year.

While the figure, almost 2 million, does not represent a one to one calculation for gun sales, it is considered a reliable indicator of overall gun sales. Sales between private parties are not subject to background checks.

The reason for record gun sales, say gun rights activists, is the push for further gun control by Democrats. 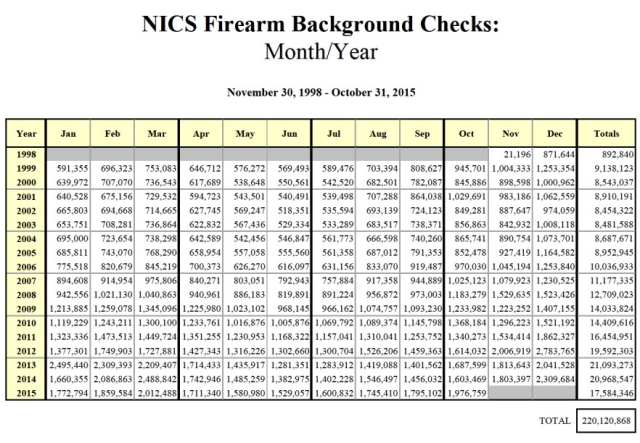 Alan Gottlieb, the head of the Second Amendment Foundation, told InfoWars, “Barrack Obama and Hillary Clinton are the best gun salespeople on the planet. The more they scream for new gun control laws the more guns walk off the shelves at gun stores. To quote the lyrics of Peter, Paul and Mary, ‘When will they ever learn, when will they ever learn.'”

SHARE if you’ll never give up your right to bear arms!