SHOCKING Study Shows Americans How Criminals Are Getting Guns In Chicago! [VIDEO]

There are a million and one reasons[1] that Chicago is a hell pit, but this one is a biggie. In the last five years, trains have been robbed in Chicago more than 400 times. It can take a train a full day to get through Chicago… as they roll into the city, they wind up stopping on tracks in very dangerous neighborhoods. Gangsters and thugs simply take bolt cutters and open up the cars like metallic Christmas gifts. And a lot of those train cars contain guns and ammo. No security… just arms ready made for the streets of the Windy City.

Last November, a half a dozen semi-automatic rifles and 27 handguns were lifted from a rail car stationed in downtown Chicago. Where do you think those wound up? Gang bangers and it facilitates the murder of children and innocents on an ever growing basis. All because people are not allowed to arm themselves, which leaves the gangs the only ones who are armed. “There’s no city like Chicago where every major railroad comes together,” Joseph Schwieterman, a transportation expert and DePaul University professor, remarked at the time. “You have dozens of interfaces — that means small yards spread around town that creates some of these vulnerabilities.” 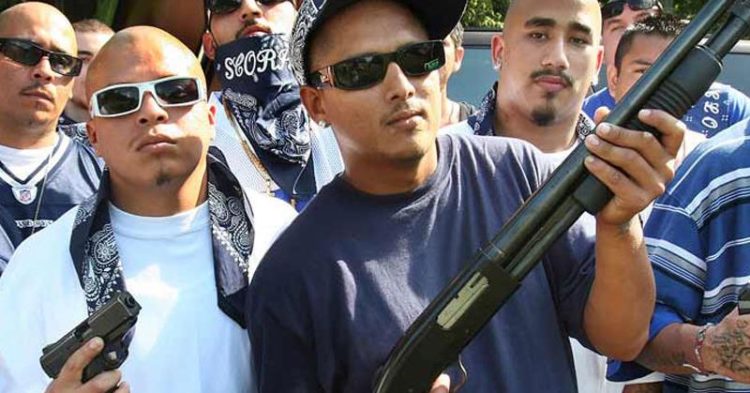 By The Federalist Papers Project:

An investigation by a Chicago news station has revealed that thousands of guns have been illegally obtained by the city’s criminals through the ages-ol’ tradition of train robbery.

This stunning tactic works because to reach their destination, trains must “pass through some of Chicago’s roughest neighborhoods,” according to station WGN[3], which added that unfortunately, these paths can take up to a full day to traverse:

It is a slow and meandering path to pass through the city, sometimes taking a full day to move through, says Senator Emil Jones III. During some of that time Jones says, “Trains are sitting in high-crime neighborhoods. It’s just a potential target to get broken into.”

And being broken into is exactly what has happened to dozens upon dozens of trains. In the past five years, in fact, trains passing through Chicago have reportedly been hit more than 400 times. And in a number of those robberies, the goodies obtained were weapons.

Why isn’t there armed security on these trains? Pinkerton and Loomis used to ride the rails to protect cargo. The US Marshals also rode the rails. Why aren’t they doing this now? It seems it would head off theft and lawsuits. Chicago could mandate that trains who travel through the city have security. This isn’t rocket science here. I assume there is no security because the shipper or the railroad or both are cutting costs.

There are railroad police agencies out there. Most railroad police agencies are participants in the FBI’s Joint Terrorism Task Force (JTTF). It would be a pretty straightforward thing for either the railways to employ security when cargo is going into a major city or for the city itself to require it. There’s more than one way to stop a train robbery… more guns and security is the best way.