Sit On THIS! House Democrats PUNISHED For ‘Tantrum’ Sit-In…And Here’s Why [VIDEO]

Paul Ryan and Majority Leader Kevin McCarthy[1] are getting ready to slap House Democrats for their disgraceful sit-in. Nancy Pelosi is talking smack, saying “Make my day!” Oh, don’t tempt us, you old battleaxe. Dems threw a snit over gun control and plunked down their elderly fat behinds onto the House floor… replete with cushy pillows and catered Chick-fil-A. Their protest lasted just about 24 hours and was one of the dumbest things I have ever seen. They were unprofessional, undignified, rude, disruptive and destructive. They deserve a permanent time-out as far as I’m concerned. 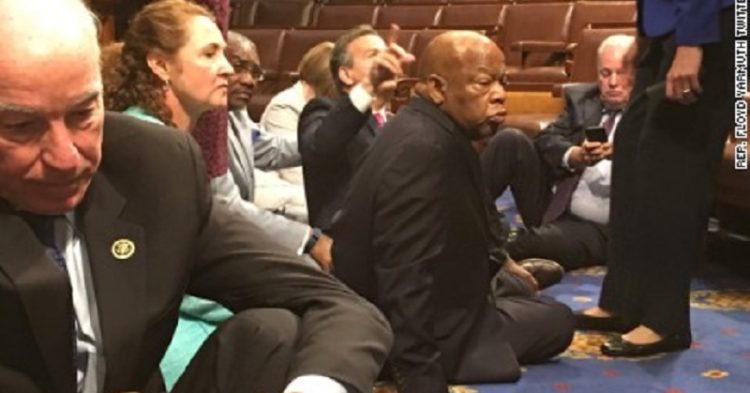 House Democrats are likely to be punished for their side-show last week – the “sit-in” calling for more gun control.

Majority Leader Kevin McCarthy said that he met with Speaker Paul Ryan and Sergeant at Arms Paul Irving and they confirmed several “acts of misconduct.”

The 24-hour “sit-in” came after the GOP decided not to vote on a gun-control measure. The protest broke several house rules, prompting an investigation by Republicans.

“Some of the actions were confirmed by some of the reports… There was damage to furniture, members pulling papers out of the hands of the professional staff within there, there was fundraising going on the floor – there were a number of things that broke the rules,” McCarthy told The Daily Caller[3]. “We looked at different options on how to deal with this.”

House leadership wants to make sure publicity stunts like this one don’t happen again. “We’re a democracy and there are different ways to debate ideas, and that was not one of them,” McCarthy said. “The House has a long history, when people break rules there are responsibilities and actions taken, and I expect the same thing will go forward on this as well.” Evidently, Democrats broke a number of rules while reliving their protest glory days. Tantrums because their fascist legislation did not go through should not be tolerated. The Sergeant at Arms should have kicked every one of them out. They should be censured, fined and possibly suspended over this. No one is above the law, even if they are an aging, delusional hippie.