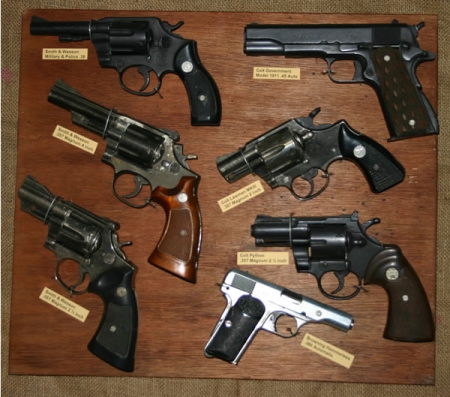 A regular gun show that has been a staple of Austin, Texas, since 2010 will end this month because its organizer refuses to obey local Democrats’ demands for background checks that go beyond state and federal laws.

“It is not really my job to infringe on anyone’s rights,” said Todd Beiter, the owner of Saxet Gun Shows, which has hosted gun shows at the Travis County Exposition Center for four years, according to the Austin American-Satesman.

The gun show set for Jan. 25-26 will go on because it has a lease on the site. The show won’t be held next year, though, because the contract will not be renewed.

… At issue is the Travis County Commission Court’s demand that Saxet require background checks for private sales at the gun show.

Federally licensed gun dealers must already perform background checks — to make sure potential buyers aren’t felons prohibited from owning guns — but private citizens don’t have undergo the screenings. That wasn’t good enough for the Travis County Commissioners Court (four Democrats, one Republican), which demanded the 10 percent of guns purchased at the show by private citizens be submitted to a background check, too.

The Democrats of Travis County have been on a tear against gun rights along with their liberal fellow travelers in the rest of the country. Last year, they courted a legal fight with Texas Attorney General Greg Abbott — a leading contender to succeed Gov. Rick Perry — when they tried to close the so-called “gun-show loophole” on background checks.They backed down after Abbott detailed the state’s position.

“If Austin or Travis Co. try to ban gun shows they better be ready for a double-barreled lawsuit,” Abbott wrote in a tweet.

So, the liberals in Travis County wanted to ban gun shows, but knew they’d be sued by the state. So instead, they put a condition in place that they knew would be unacceptable in order to kill the gun shows that way. Hopefully, they’ll be sued for that as well since their goal is exactly the same; they’re just using another method to undermine the 2nd Amendment.