Criminals really should be careful about who they rob. One career criminal found that out the hard way when he robbed the home of an elderly couple — and they left him cowering on the street. 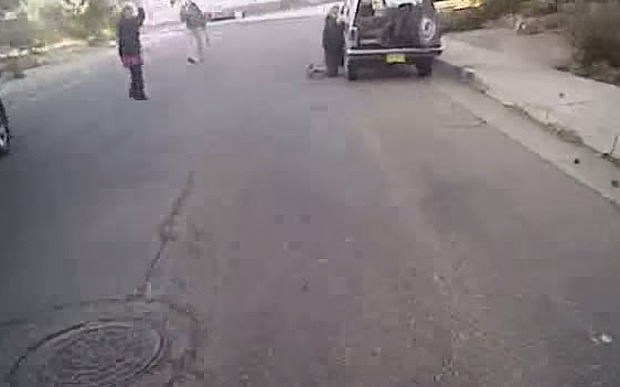 A burglar got more than he bargained for when an elderly couple caught him loading their belongings into a car – and held him at gunpoint until police arrived.

Officers arriving at the scene, in the 1600 block of Lafayette NE Street in Albuquerque, found a 70-year-old man and his wife, 66, pointing their guns at Aaron Lujan.

The 26-year-old was released from jail on Thursday – but later that same day, he was caught loading the stolen items into a stolen SUV.

They arrived minutes later to find the elderly couple both pointing their weapons at Lujan.

Police body camera footage shows the moment officers arrived at the scene to find the suspect cowering on the ground near the vehicle before lying face down as an officer handcuffs him.

… The man says he confronted Lujan in the street outside his home, but was ignored.

The husband then grabbed his shotgun while his wife took a handgun and both held Lujan at gunpoint until authorities arrived.

Trixier told KRQE: ‘The old man goes inside his house arms himself with a shotgun, tells his wife what is happening and she arms herself with a handgun.’

Not even out of jail for 24 hours, and he’s already back to committing crimes? Thank goodness for this couple, because if they hadn’t stopped him, he’d still be out there robbing other people — or worse.