The hoplophobia epidemic continues to rage out of control in Education Land:

An engineering student at Saint Louis University prompted a campus-wide lockdown and a hunt for a possible shooting suspect on Wednesday after his class assignment to build a toy gun was mistaken for a real weapon.

The private university in Missouri issued a shelter in place order Wednesday afternoon after a witness reported seeing someone in a black hoodie go into a dorm with what looked like a gun, the St. Louis Post-Dispatch reports. …

As a part of the Aerospace and Mechanical “Engineering Manufacturing Procedures” class, students had been assigned to build a toy rubber band gun.

Somebody is in hot water over this assignment. Guns are wrong. Everyone in education is supposed to know that.

The university issued a statement asking all of the students to bring the toy guns in closed containers to a university office Thursday, where they will be destroyed.

“This is the first time toy guns have been made in this class, and it will be the last,” the university said.

Relax, students. The rubber band guns can’t hurt you now. The educrats have made you safe.

Missouri is a constitutional carry state, meaning that actual firearms can be carried openly or concealed, with only the U.S. Constitution serving as a permit. But college campuses exist in a separate realm of pure moonbattery. 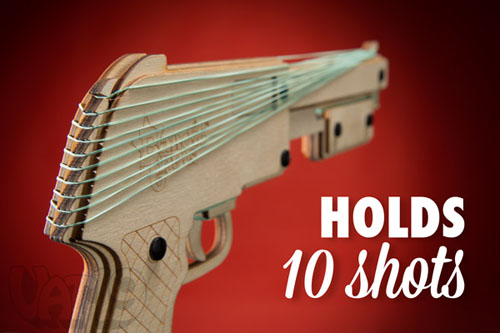 No one needs 10 rubber bands to annoy their roommate.

On a tip from rpp618. Cross-posted at Moonbattery.