Socialism in Venezuela has failed. The country can’t even keep the power on. What is left of the strangulated free market cannot provide jobs. People have been reduced to eating garbage, pets, and zoo animals. As civilization collapses, crime has exploded. So what does the leftist government that brought about this situation do to rectify it? Target guns, of course:

Venezuelan police crushed and chopped up nearly 2,000 shotguns and pistols in a Caracas city square on Wednesday, as the new interior minister relaunched a long-stalled gun control campaign in one of the world’s most crime-ridden countries.

Interior Minister Nestor Reverol said the event marked the renewal of efforts to disarm Venezuelans, through a combination of seizures and a voluntary program to swap guns for electrical goods.

This should certainly help disarm law-abiding Venezuelans who are preyed upon with increasing aggressiveness by the growing criminal class. As for the criminals, they will continue to be armed, because they get their guns from the government.

Gangs often get weapons from the police, either by stealing them or buying them from corrupt officers, experts say.

With inflation of 185 percent in 2015 and a currency collapse, police salaries have fallen far behind rising prices creating more incentives for corruption. …

Experts say that much of the ammunition used in crimes in Venezuela is made at the country’s government munitions factory and sold on by corrupt police.

Meanwhile Reverol, who was promoted from Drug Czar days after being accused by the USA of taking bribes from cocaine traffickers, proclaims, “We are going to bring disarmament and peace.”

Socialist Venezuela continues to demonstrate why government must be restrained within its proper bounds, and to serve as an inspiration for the American Left. 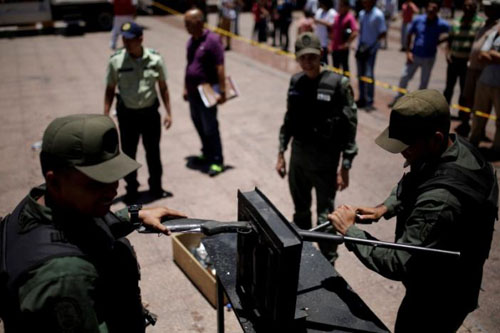