VIDEO: Four Armed Men Enter a Bar and Demand Money; One Patron Hands Them Something That Leaves Two Men Running Off and Two Men Dead

Score one for the gun rights advocates. When four armed men came into a bar demanding cash, they probably weren’t counting on one of the patrons there also being armed, and killing two of the would-be robbers, with the other two running for their lives. 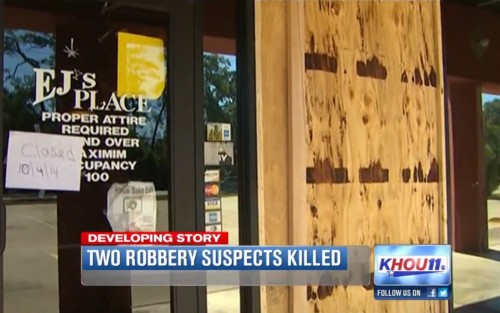 The were armed and demanded money from the folks inside the bar.

But one customer decided to give these crooks something different.

The patron pulled out his own gun and began firing at the four men, KHOU-TV reported, adding that the intruders also fired weapons.

When all was said and done, two of the intruders were dead and the other two ran off, KHOU reported.

“We’re still trying to determine who he is, and why he left the scene,” Harris County Sheriff’s Sgt. Robert Spurgeon told KHOU.

This is why the right to bear arms is so important. Had this customer not been in the bar with a firearm, then the outcome of this story could have been a tragic, bloody nightmare — instead, a bunch of thugs learned their lesson when this hero defended himself and the other innocent people there.