VIDEO: Man With License to Carry Shoots Down Armed Robber in Detroit

Every time there is a high-profile shooting, liberals come out with calls for more gun control. Guns are demonized, with very little attention paid to the times that guns have saved lives. The reality is, guns allow people to defend themselves — like the time that a robbery was thwarted in Detroit. 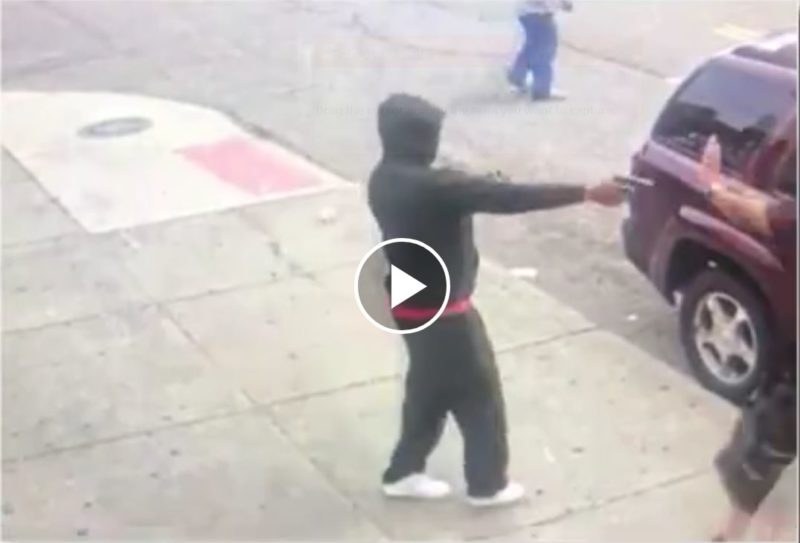 According to Detroit police, 29 year-old Sanchez Quinn planned to rob two people outside of a Detroit supermarket last week. But instead of shooting one of his attempted victims, the victim turned the tables on him and fought back.

It turns out that one of the people Quinn attacked is a concealed pistol license holder. “I turned and looked and saw the other gentleman had a gun pointed at my face,” the man, whose identity is being kept anonymous, said. “I was able to knock his hand down and the gunfire rang out.” High-definition surveillance footage caught the shootout on film.

Quinn can be seen approaching someone while holding up a gun. The man, wearing a black and white t-shirt and shorts, was able to fight back and take Quinn down and then shoots him multiple times. The third person, who was the cousin of the anonymous good Samaritan, was injured in the crossfire.

Both Quinn and the cousin were taken to the hospital, but both are also expected to survive. Quinn was also arrested. His mother, Cynthia Quinn, told local news what happened when she arrived at the hospital. “When I went to my son’s room I was stopped by two police officers (who) told me to get out of my son’s room,” she said. “‘Why you here? You can’t be here.'”

She continued, “All I want to do is see my son to see if he’s alright.”

Also with Quinn was a partner, who was also arrested. And police praised the anonymous man for having a gun on him. “It makes me mad because you have people out here that work every day. They are innocent; you want to take from them,” he said. “These guys, I definitely feel don’t need to be back out on the street because someone else might get hurt and it might happen in a different way.”

Commenters praised the story. “Satisfying to see that citizens can defend themselves,” one person wrote at Fox News. “I once lived in a community where many citizens did carry and there were no holdups and a very low crime rate because the criminals did not know who was carrying so they avoided the risk.”

“There are literally hundreds of thousands of incidents each year where a legal gun owner prevents a crime of violence against him/herself or someone else,” another added. “An armed society is a safe society.”