VIDEO: PSA Encourages Kids to Steal Their Parents’ Guns and Hand Them Over to Teachers

Anti-gun nuts have come up with a lot of crazy ways to try to convince the public that guns are dangerous objects prone to killing people at random with no warning (as opposed to the inanimate objects they actually are). But one new PSA, which encourages kids to commit a bevy of crimes by stealing their parents’ guns and bringing them into their schools to give to teachers, make just take the crazy cake. 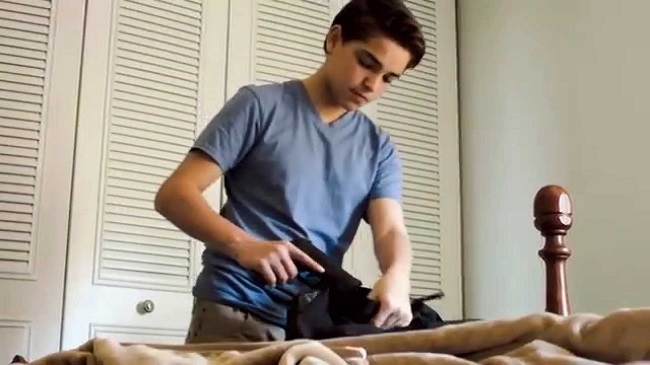 A startling new anti-gun ad released by a San Francisco-based production company encourages children to commit a series of crimes by stealing their parents’ guns and turning them over to school officials, The Daily Caller reported Monday.

Sleeper 13 Productions released the controversial video on Dec. 13. It shows a pouty, young boy wandering into his parents’ bedroom, stealing a handgun out of their dresser drawer and then shoving it into his backpack.

The boy then carries what is presumably a loaded weapon into his classroom. After class, he approaches the teacher, takes the gun out of his backpack and slams it onto her desk.

“Can you take this away? I don’t feel safe with a gun in my house,” the boy says.

“Lot of people are afraid to share my PSA!” tweeted the ad’s director, Rejina Sincic. “If you are not a coward please share #gunviolence.”

Fred Rick Friedman questioned on Facebook: “So, when a child does this and accidentally kills himself or an innocent bystander, will Sleeper 13 Productions and Ragina Sincic be brought up on charges as an accessory? This has got to be one of the dumbest PSA’s put out by anti-gunners ever. Way to combat criminal violence…turn innocent children into felons.”

If a child were to do this in real life, they’d be committing a laundry list of crimes: theft, unlawful possession, illegal concealed carry… and that’s just a few for starters. With the zero tolerance policy schools favor so much these days, too, most teachers aren’t likely to be too understanding of why a kid brought a gun to school, even if it does line up squarely with a liberal agenda. Unfortunately for the makers of this PSA, this is one ad that has quite obviously backfired right in their faces.