VIDEO: What Happens When Harry Reid’s Bodyguard Goes Thug on a Conservative Journalist

Jason Mattera, known for his gutsy reporting, may need to hire a bodyguard of his own. Apparently, Harry Reid allows his bodyguards to assault people who ask questions that Reid doesn’t want to answer. 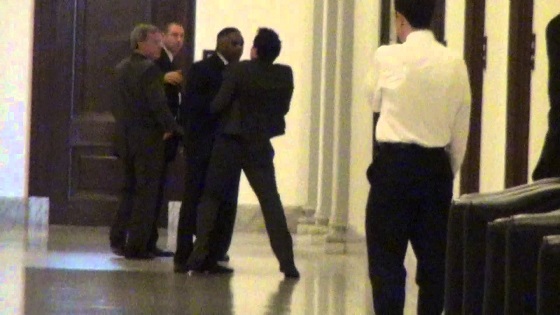 The video that shows the physical assault on that journalist, Jason Mattera, is oriented toward selling the writer’s book, “Crapitalism;” but it also demonstrates Mattera’s gutsy willingness to confront liberal politicians like Democrat Harry Reid.

In the video, you’ll see how Reid’s incredibly aggressive bodyguard went “thug” on Mattera after the journalist asked the senator how he amassed such a large fortune on a government salary.

So in Harry Reid’s little liberal bubble, the only press allowed are the ones that are completely biased and don’t even bother to show it — which, sadly, is most of the mainstream media. Dare to be a conservative reporter and ask Reid a question he doesn’t like, and risk facing the wrath of his thug bodyguards.