Cass Sunstein, is that you?[1] A bunch of influential elitists now want to tax meat like cigarettes to reduce meat consumption worldwide. Nudge, nudge. How very fascist. This is all wrapped up in battling faux climate change and it is supposedly for our own good. Now they are blaming our love of charbroiled steak for climate change. They claim that juicy burger causes the non-existent rising waters, shrinking ice caps and sweltering days that never were. Polar bears are getting ever more numerous and climatic disasters are so rare that you can count them on single digits. Everything these creeps want to do to us is justified by their global warming scam. If they think we won’t revolt over the removal of meat, these guys are balmy. 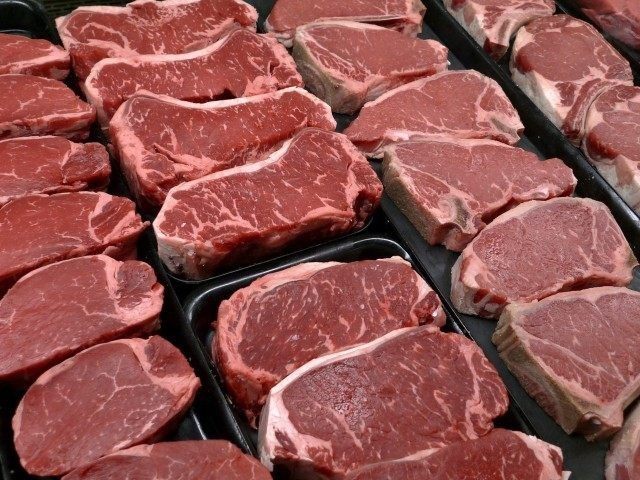 An influential think-tank with close ties to government has co-authored a report advocating so called meat tax as a means to lower meat consumption worldwide.

Tackling climate change and improving public health can be achieved by forcing consumers to eat less meat in their diets, and it is up to government to force that change, finds a new report[3]. Co-authored by the University of Glasgow and Chatham House, one of the world’s most influential think-tanks, the paper claims “our appetite for meat is a major driver of climate change”.

Finding global meat consumption has reached “unhealthy levels” and cutting consumption is key to “keeping global warming below the ‘danger level’ of two degrees Celsius”, the paper calls for urgent government intervention. Far from being a potentially fatal move for democratic governments around the world, the report findings insist the public won’t actually react badly to the State taking meat off the table.

The changes and government intervention should be packaged and served up to the public in the same way punitive taxation and gradual banning of tobacco products were,reports[4] The Guardian.

Speaking on the findings, report author Laura Wellesley of Chatham House said: “Governments are ignoring what should be a hugely appealing, win-win policy.

“The idea that interventions like this are too politically sensitive and too difficult to implement is unjustified. Our focus groups show people expect governments to lead action on issues that are for the global good. Our research indicates any backlash to unpopular policies would likely be short-lived as long as the rationale for action was strong”.

The report itself lists strategies governments can implement to get the taxes past voters, many of which would be familiar to the anti-tobacco lobby. Top of the recommendation list is to frame the taxation as a measure to pay down the cost of treating meat-related healthcare costs in socialised heath services, such as Britain’s NHS. The report says government, the media, the scientific community, and “responsible business” should all be mobilised in unison to change public opinion against meat.

“Positive associations with nutrition” and meat in nations like the United Kingdom and the United States, as well as the low cost of meat and “social norms that promote meat eating” would all have to be overcome in order to usher in the changes, the report noted.

The paper emphasises the importance of campaigns against meat coming from “trusted sources”, and as government is often distrusted by the general population there should be a reliance on “experts”. One example of consumer confidence in meat having been dented by the proclamations of such experts has been observed in the past month after United Nations body the World Health Organisation released a major report on the health impacts of processed meat.

Although widely criticised and derided as being unreliable[5], the linking of bacon, sausages, and red meat to cancer had a distinct observable effect on consumer behaviour. According to latest industry figures, bacon and sausage sales fell by £3 million in the two weeks following the report release.

Regardless, if governments can be sufficiently persuaded by the Chatham House report that they start to implement policy to phase meat out of regular diets for the sake of combating climate change without significant backlash, they may be in for a nasty surprise. Breitbart London reported[6] last week on the trailblazing example set by one major Scandinavian hotel chain, which announced it would be no longer be serving pork bacon and sausages for breakfast as a means to help prevent climate change after coming under pressure from the chain owner’s wife – a globe trotting climate campaigner.

Despite offering a green, “plant-based” alternative to breakfast bacon, the chain suffered significant backlash and loss of custom, and just a week later announced they would be bringing back meat. Chain spokesman Camilla Bergman said of the change[7]:

“We at Comfort Hotels view ourselves as the small hotel rebel who wants to challenge the traditional.

“The response from guests shows that we very much did just that. Though many praised us for the measure, the visitors’ feedback clearly emphasised that they still wanted bacon. Therefore we are bringing back the bacon”.

Damned straight we want our bacon! The backlash will be massive. First off, global warming doesn’t exist and everyone knows it except the mentally challenged and the corrupt. This is sheer propaganda and the manipulation of the masses for the gain of a few. That study on meat being linked to cancer was bogus and ridiculous. They skewed the percentages and put it out as fact. No one fell for it. We all laughed at it. When that didn’t work like they wanted it to, they came out with this study on how to further tax us into submission. That’s called tyranny. I fervently hope people across the planet get enough of this and stand up and take their freedoms back from these tyrants. I don’t want some bureaucrat telling me what is good for me and what isn’t. I want to be left the hell along to lead my life and go my own way. Governments have no business ‘managing’ people and their lives like this. It’s Orwellian.