Don’t EVER, EVER, EVER Give Your Child This Common Medication If He Has Chickenpox

Hayley Lyons didn’t think much of it when, after her son contracted chicken pox, her doctor recommended that she give him ibuprofen. So she did — with disastrous results. 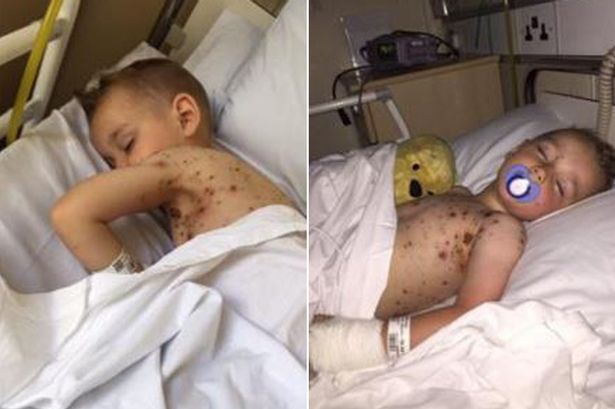 “Chickenpox is going round again can I please remind people NOT to give your children nurofen/ibuprofen,” Hayley wrote on her Facebook page.

“4 different doctors from our local (out of hours) prescribed it for Lewis as we couldn’t get his temp down.”

“This type of medicine is an anti inflammatory, it reacts with chicken pox making them go deeper into the skin tissue.”

“It was only wen we took Lewis to Alder Hey because the doctors from our hospital kept sending him home saying it was ‘just chicken pox’ we found this out. He ended up with septicaemia and was admitted straight to Alder Hey as soon as we arrived there.”

Symptoms of septicaemia include: sudden high fever with chills; nausea, vomiting and diarrhea; abdominal pain; shortness of breath; and rapid heart rate. It can be treated with antibiotics, but early treatment is essential.

“Only because we persevered an took Lewis to a children’s hospital off our own back was he ok. This could have ended up so much worse if it wasn’t for those doctors at septicaemia and their advice, care and knowledge. Only use CALPOL for their temps.

It does actually state on the nurofen website not to take this medicine with chickenpox. (We discovered this after it happened) But when our doctors prescribe it, who are we to question it??”

Lewis is currently in recovery.

Meanwhile, because of Hayley’s public outcry, The National Institute for Health and Care Excellence (NICE) has recommended that ibuprofen is no longer used for chickenpox. The Royal College of Paediatrics and Child Health now says both parents and doctors need greater awareness of the small but significant risk ibuprofen carries in chickenpox cases.

An even better idea would be to give your children the varicella vaccine and prevent them from getting chicken pox altogether. Why subject your child to a horrifying disease that can cause more painful health problems as they age when it can be prevented with a simple vaccine? Polio was eradicated thanks to vaccines; we should make chicken pox be next.