Once considered a conservative governor due to signing SB 1070, which toughened up illegal immigration laws, Arizona’s Governor Jan Brewer has now destroyed that reputation. Last week, she called a surprise special session of the legislature, and allying with Democrats, bullied through Obamacare’s massive: expansion[1]: of Medicaid, known as AHCCCS in Arizona. The bullying tactics she used to coerce Republican legislators into voting for it were so appalling, they made national news and have prominent Republicans all over the state speaking out in outrage. 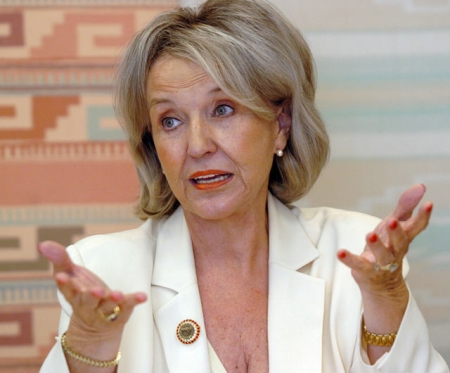 Brewer called legislators into the State Capitol at 5 p.m. last Tuesday, and kept them there until they passed the bill at 3:40 a.m. According to Arizona State Rep. Kelly Townsend (R-Mesa), a Tea Party leader, the 600-page bill was presented at the last minute to legislators, who were told they would be voting on it within a few hours — not enough time to thoroughly examine it. Legislators were instructed not to answer any questions, nor vote yes on any amendments. One of the amendments they were forced to turn down would have created a Pat Tillman license plate to benefit veterans and their families (fortunately it was added to another bill a couple of days later and passed).

Kelly sent a mass email to Republicans around the state after the debacle, blowing the lid off Brewer’s underhanded tactics, which included this appalling story, “One Republican legislator whom I won’t name told me that when they were in the Governor’s office, they were offered help on their next reelection campaign and an assurance that they would win if they voted for the expansion.”

Legislators who dared to speak up against Brewer’s Medicaid expansion had their bills vetoed by Brewer in retaliation. In May, Brewer: said[3]: she would continue to veto unrelated bills until Republicans agreed to expand Medicaid. She brazenly admitted, “I warned that I would not sign additional measures into law until we see resolution of the two most pressing issues facing us: adoption of a fiscal 2014 state budget and plan for Medicaid. It is disappointing I must demonstrate the moratorium was not an idle threat.” One of the bills she vetoed in retaliation would have allowed people to sue over violations of religious freedoms.

Brewer even: devised[4]: a plan to oust Senate President Andy Biggs and House Speaker Andy Tobin, both Republicans, from their leadership positions if they tried to stop her Medicare expansion from coming up for a vote.: National Revieweditorialized[5]: about her actions, “This is conduct unbecoming of a chief executive.” Arizona Rep. Debbie Lesko (R-Peoria), the House Majority Whip, declared, “I feel like I’ve been punched in the gut, and I feel like I’ve been betrayed.”

The legislation expands Medicaid to not just parents, but childless adults earning a salary of up to 133% of the federal poverty level. Childless adults making up to $15,282 annually will be eligible. Enrollment in AHCCCS for childless adults in Arizona was frozen in 2011 during the state’s fiscal crisis, so the number of childless adults on the welfare rolls decreased from 227,000 to 86,000. Brewer’s office estimates the bill will add 240,000 people to Arizona’s welfare rolls, and increase coverage for 57,000 more.

Of the handful of Republican governors who support the expansion, Brewer has been the most avid. They all look: silly[6]: in light of a study released by the New England Journal of Medicine, which examined the impact of Oregon’s decision to expand Medicaid in 2008. Participants were selected by a lottery process, since there wasn’t enough money to fund everyone. It turned out those who received the benefits were no healthier than those who were not selected to participate.

Nineteen states have rejected the expansion, including many Republican governors.

Brewer claims to oppose Obamacare, stating at a press conference in Yuma, Ariz., earlier this year, “I’ve never been a supporter of the Affordable Care Act.” Yet Brewer started holding rallies around the state in January drumming up support for the expansion.

The legislation requires the broke federal government to spend $1.6 billion on new adults in Arizona enrolling in Medicaid. There is no guarantee the federal government will have the funds, and even if it does, the bill calls for some of the federal funding to be gradually phased out. Instead, Arizona is supposed to recoup some of the costs by taxing hospitals — which will in turn pass the cost along to their privately insured patients in a hidden healthcare tax. Unlike previous Medicaid expansions, there are no tobacco funds to raid to use to pay for it. Some of the funding will likely be directed toward Planned Parenthood, indirectly funding abortions, since Planned Parenthood performs the vast majority of abortions in the country.

Brewer’s support of Obamacare sounds more like that of a Democrat governor, and her bullying tactics similar to the Alinsky tactics the left uses. Even if one believes that it is the government’s responsibility to take care of those with medium-low incomes, there is not enough money to afford this expansion. In 2012, Medicaid already: comprised[7]: 24 percent of state budgets nationwide.

Most consider this a fatal blow to Brewer’s chances for re-election. She has not indicated yet whether she will run for reelection. Although she replaced Janet Napolitano as governor midway through Napolitano’s term after Napolitano was tapped for Homeland Security secretary, she may be barred by the state constitution’s term limits provision from running for a third term.

After Brewer began campaigning to expand Medicaid earlier this year, several Republicans announced they were forming exploratory committees for governor. Former Maricopa County Attorney Andrew Thomas, the favorite of conservatives for taking on corruption and collusion among the State Bar, the judiciary, and county officials — resulting in the State Bar targeting him and disbarring him — is considered the leading Republican candidate to replace Brewer. Thomas was the first GOP leader to publicly come out against the Medicaid expansion in January, and won the first straw poll for governor on the popular Arizona conservative blog Sonoran Alliance last month.

Some suspect that Brewer rammed the bill through as appeasement to Obama, in order to get him to back off on attacking Arizona over SB 1070. But more likely, and perhaps the most disturbing part of all of this, is that the move was orchestrated by her powerful consultant and lobbyist, Chuck Coughlin of High Ground. A political moderate, he is believed to be calling a lot of the shots behind the scenes in the governor’s office. His: clients[8]: include some of the most powerful interests in Arizona’s healthcare industry, including the Arizona Association of Health Maintenance Organizations, United Health Care, Sun Healthcare Group, Pacificare, MedPro, Arizona Health Care Coalition and Arizona Self-Insurers Association, which all stand to benefit greatly from the Medicaid expansion.

To many Arizonans, the desertion of principles by Brewer is nothing new. She avidly supported an 18% sales tax increase in 2010, appearing in TV commercials with attractive looking children to advocate for it. The tax increase was to be spent on infrastructure and education. Many believe she pushed it to benefit Coughlin’s clients , which include many construction-related businesses.

A new organization popped up in the last few days in response to the bill being forced through. American Commitment has put together a: video[9]: of statements by the brave legislators who spoke on the House floor against the expansion. State Rep. Eddie Farnsworth (R-Gilbert) perhaps said it best, “This governor, who became famous for wagging her finger in the face of the president, is now wagging her finger in the face of the people of this state.” The repercussions of this will be deep and long lasting, and will be seen in the 2014 gubernatorial and legislative races.