He Went to the Doctor’s With a Headache. What They Found Inside His Brain? OMG…

Holy crap![1] This young man was studying for school when he got a whopper of a headache and threw up. His mother called an ambulance and it was a good thing. The doc said the kid would have been dead within about 30 to 60 minutes if he hadn’t gotten in when he did for emergency brain surgery. Luis had a tapeworm in his brain that was cutting off vital fluids. It was alive and well and killing him. When the doc pulled it out, it was still wriggling. Gross. He’d had headaches before and ignored them, but this one was killer… literally. That doctor saved his life and Luis Ortiz is fine now. What a wake up call. 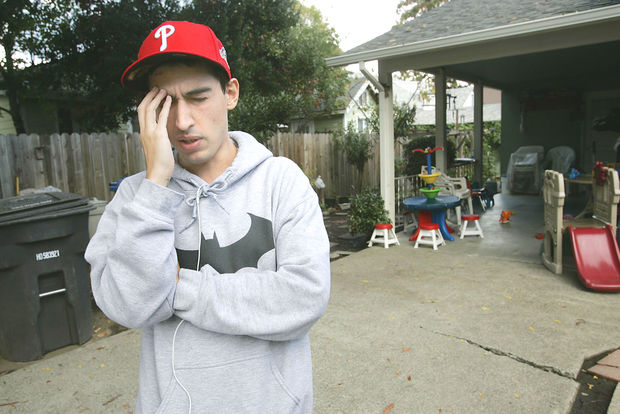 Every now and again, people go to the hospital for what they think is a routine problem, only to discover that it was actually something much, much worse.[3]

According to the Napa Valley Register,[4] Luis Ortiz was one of those people. Ortiz went to the hospital with a bad headache, and found out that he had a worm living in his brain.

Ortiz stated that his headaches began in August, but he initially just ignored them. Eventually they got very bad and he drove to his mother’s house. After he began to vomit, his mother drove him to the hospital.

Ortiz became comatose, and doctors performed a scan on his brain, and had to put a drain in his brain to relieve enough pressure to keep him alive.

When Ortiz woke up, doctors told him that a tapeworm larva had taken up residence inside his brain.

“The worm had formed in a cyst that was blocking the flow of water to chambers in the brain, ‘like a cork in a bottle,’” explained Dr. Soren Singel, the neurosurgeon who handled Ortiz’s case. Another 30 minutes of that blockage, and “he would have been dead,” he said.

Talk about a close call.

“I was shocked,” Ortiz told the Register. “I just couldn’t believe something like that would happen to me. I didn’t know there was a parasite in my head trying to ruin my life.

“I was really lucky,’ he said. “They said, ‘If you came in a hour later, you wouldn’t be alive.’ … I’m grateful for all the things the doctors and my parents have done.”

Doctors believe that the unwelcome guest might have come from pork that was not completely cooked.

Check out the story on CBS News.

This should serve as a reminder to everyone to make sure whatever you eat is thoroughly cooked. You never know what is living inside your food that may be trying to kill you.

After Luis threw up, he slipped into a coma. Doctors performed a brain scan and had to put a stint in his brain to relieve enough pressure to keep him alive. The tapeworm had taken up residence in a cyst and was feeding off Luis. His doctor said, “We see quite a few patients” in the U.S. with parasitic worms, especially in California, where locals visit Mexico, South and Central America, he said. In some of those areas, pigs and humans live in close proximity, leading to contamination. Meat in other countries is not always subject to the same inspections as in the U.S. But Luis hadn’t been to Mexico in ten years and had not eaten under-cooked pork that he knew of. Evidently, Luis’ case is a bit unusual as the worm usually dies in someone’s brain, not the other way around. I doubt that Luis will eat pork anytime soon, just in case.