It’s like watching your child walk again. What a wonderfully happy event![1] The staff hid the dog on a leash behind a divider until the woman walked in. When Sammi ran to her, she dropped what she was carrying, fell to her knees and hugged him. Tears of joy fell and she held her hands to her face. I think she thought her pup would never walk again because of the degenerative situation in the dog’s neck which paralyzed him. To see him run and lavish love on her again just brings your heart into your throat and tears to your eyes. 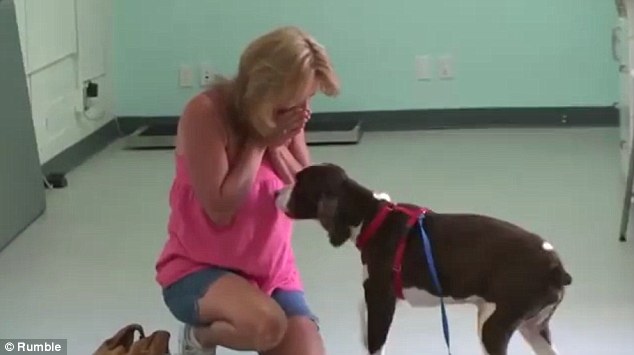 This is the heartwarming moment a woman saw her pet dog walking for the first time after surgery and rehabilitation.

The dog named Sammi, a Springer Spaniel, had a degenerative change in its neck causing it to lose the ability to use its legs.

Its owners took it to California Animal Rehabilitation centre in Santa Monica, California, and the dog received help from both veterinarians and physical therapists.

The dog’s progression was documented on camera and the moment it was reintroduced to its owner was captured on video.

In the clip, the dog is kept on a lead and hidden behind a wall by a member of staff at the rehabilitation centre.

The owner then walks into the clinic and the dog is left to wander around the corner towards her.

Shocked, the woman drops what she is holding and brings her hands up to her mouth.

She then falls to her knees and greets her pet, who rather excitedly and confidently makes it ways over to her.

Later in the clip, the dog shows off its ability to run and heads over to the video maker, on his command, before trotting back to its owner for more cuddles.

The video then concludes with the owner showing her gratitude by sharing a hug with the dog and a member of staff at the rehabilitation centre.

In the end, Sammi shows off by running to the video maker and the owner hugs the staff member. Her world was just rocked and Sammi has a new lease on life. What a beautiful dog Sammi is. Young and playful – now he can run in more than just his dreams and chase butterflies and bunnies all over the place. This animal clinic performed a miracle with the surgery on Sammi and gave this woman the happiest surprise of her life. That’s priceless. Sometimes there are happy endings and Sammi is proof of that.