Once upon a time, Sarah Palin warned us that death panels were coming… and liberals mocked her for it. But they’re real, as one Texas family is finding out right now, as a mother fights to keep her son alive. 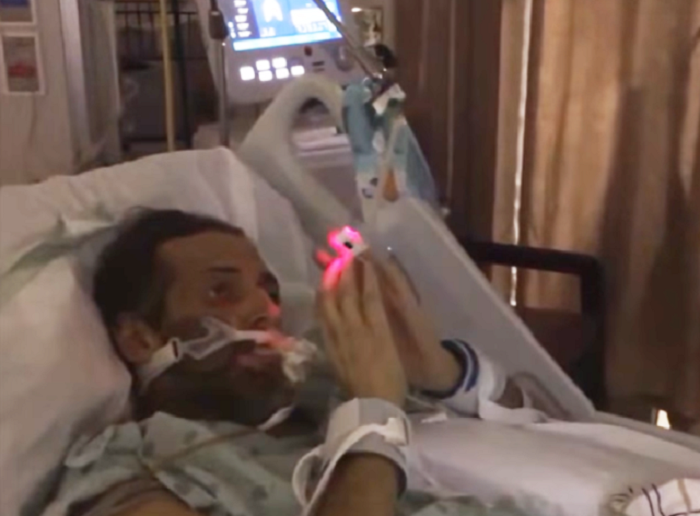 A hospitalized Texas man and his mother are in an intense legal battle with a hospital that wants to end life-sustaining treatment.

Tens of thousands have now seen the heartbreaking video above, which shows Chris Dunn literally begging to stay alive.

Dunn checked into the Houston Methodist Hospital more than two months ago with a growth on his pancreas, FOX 26 reports.

ABC 13 previously reported that Dunn’s major organs were failing. So the hospital told his mother, Evelyn Kelly, that it’d be useless to try to save his life.

To stop them from withholding life-sustaining treatment, his mother challenged the hospital in court.

“There’s a statute in Texas that allows hospitals to form a nameless, faceless committee and make a decision that they want to terminate life-sustaining care,” said Joe Nixon, an attorney from the Texas Right to Life organization.

Yet, in the video above, Dunn is seen nodding and putting his hands together to pray when he’s asked whether he wants to live.

Texas Right to Life says that throughout this desperate ordeal, he has” never been unconscious.”

“This is about people trying to play God,” said Kelly. “And nobody has that right but the Lord.”

It’s unfathomable that a committee would think that it’s acceptable to sentence someone to death who is awake, conscious, and able to express a will to live. But hey — welcome to Obama’s America, land of death panels and Obamacare.