New reports of this deadly bug popping up across the U.S. Has it reached your state yet?

It looks like the Kissing Bug[1] has made an appearance in Georgia. It first came on the scene here in Texas. Notice how the article fails to mention just how the bugs got here. They are not native to the United States. Illegal aliens brought them with them when they started flowing over our open borders. The insect is endemic in Mexico. They are called the kissing bug because they feed off of the blood of mammals, including humans. They literally kiss you in your sleep… they crawl on your face and mouth and then bite you. If that isn’t gross enough, the problem comes when they defecate on or near you. In their feces is a parasite that can kill a human suddenly and with no warning. In about 30% of cases where infection is detected, permanent heart problems are incurred. Swell huh? 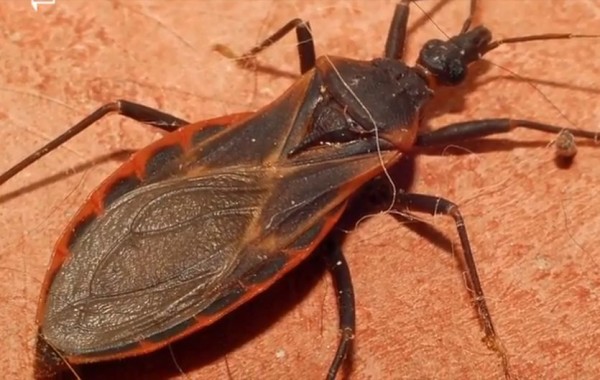 The “kissing bug,”[3] which can carry a parasite in its feces that can cause a deadly disease, has been found in Georgia, according to the Atlanta-based Centers for Disease Control and Prevention[4].

Known as triatomine bugs, they feed on the blood of mammals, including humans, and sometimes carry a parasite that causes Chagas disease — which, if left untreated, can cause sudden death, according to the CDC[5]. There are two drugs to treat Chagas, though the disease can become serious if left untreated, and about 30 percent of people with Chagas develop serious heart problems.

However, there’s a low chance in the United States of getting Chagas from a triatomine bug, according to the CDC. Worldwide, Chagas kills approximately 12,000 people a year, according to the World Health Organization[6].

The CDC was not immediately available for comment on when, where or how many triatomine bugs have been reported in Georgia.

There are approximately 300,000 people in the U.S. who have been infected by the parasite, but the majority of them acquired Chagas in Latin America, where Chagas is endemic, according to the CDC. The CDC said it does not have enough data to estimate how frequently people in the U.S. are infected with Chagas from triatomine bugs.

The bugs have recently made headlines for popping up around the South, especially in Texas[7], where 12 people have reportedly been[8] infected with the parasite.

They are called the “kissing bug” because they generally bite people on their faces and lips at night[9].

Transmission is tricky even if the bug is carrying the parasite (and not all of them are), according to the CDC: Fecal matter from the bug must be rubbed into a bite wound or a mucous membrane, such as the eye.

The bugs are typically found anywhere from under porches or cement, in animal burrows, chicken coops or even outdoor dog houses or kennels, according to the CDC. The bugs tend to defecate on or near a person while feeding, usually while the person sleeps.

To keep the insects away from your home, the CDC recommends the following precautions:

• Sealing cracks and gaps around windows, walls, roofs, and doors
• Removing wood, brush, and rock piles near your house
• Using screens on doors and windows and repairing any holes or tears
• If possible, making sure yard lights are not close to your house (lights can attract the bugs)
• Sealing holes and cracks leading to the attic, crawl spaces below the house, and to the outside
• Having pets sleep indoors, especially at night
• Keeping your house and any outdoor pet resting areas clean, in addition to periodically checking both areas for the presence of bugs

If you think you’ve found a triatomine bug, the CDC advises not to touch or squash the bug, but to place a container on top of it, slide the bug inside and fill it with rubbing alcohol.

If you do not have rubbing alcohol available, the CDC says to freeze the bug in the container before taking it to a local extension service or university laboratory.

For more information about the triatomine bug and precautions, read the full report from the CDC[11].

Some might ask how is the bug in Georgia? Isn’t the illegal alien problem mostly in border states? Ah… define border state. Georgia is now the first state in the interior of the US that has a major illegal alien problem. They call it a border gateway state. It would seem because of benefits and ease of access to the state that illegals make a beeline for it as a choice for setting up house and home. It isn’t just that illegal aliens and refugees take our jobs and our livelihoods… they bring massive crime and disease with them as well. If you find one of these bugs, put it in a cup with rubbing alcohol. If you squish them, you risk contaminating yourself with the parasite. There are drugs that treat the disease Chagas. But if you don’t catch it in time, you can die. It’s serious stuff, so pay attention to warnings and your environment. A good start would be to seal our borders and deport illegal aliens. Just a thought.