A second opinion can mean the difference[1] between life an death. It certainly did in the case of little Abigail Jones. Abigail was diagnosed with a large, terminal brain tumor while still in her mother’s womb. She also has down syndrome. Her parents wanted every precious minute with their daughter and went full term so they could hold her in their arms, even if it was for a very short time. They were sent to a pediatric hospice and they made funeral arrangements for Abigail. The strange thing is that Abigail thrived after being born and did not look like she was dying. So her parents got a second opinion that changed everything. 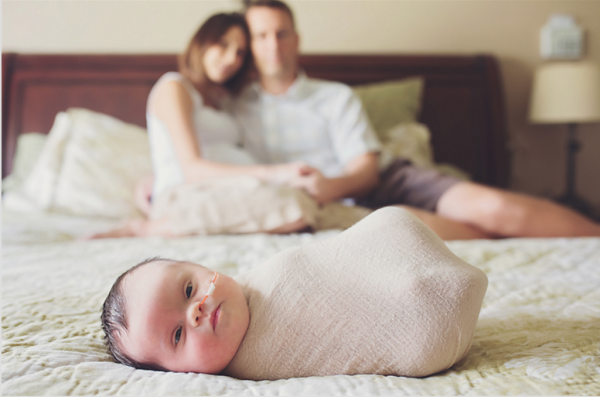 Little Abigail Jones’s parents were told that it would be a miracle if she was born alive. Doctors diagnosed Abigail with a large, terminal brain tumor while she was still inside her mother’s womb.

Erika and Stephen Jones were heartbroken, but as WEAR3[3] reported, Abigail’s parents just wanted to spend as much time with her as possible:

“It really is a celebration of life. A lifetime is a lifetime, whether it’s 5 years, 10 years or a month,” said Stephen.

‘Baby Abby’ as they affectionately called her, was also diagnosed with down syndrome before she was born.

Erika and Stephen, who had already made funeral arrangements for their daughter, decided to get a second opinion after she was born and seemed to be thriving rather than dying.

They traveled to Boston Children’s Hospital to see neurosurgeon Dr. Al Cohen, who said his team might be able to remove the tumor:

“We thought there wasn’t enough evidence to give her a death sentence and said why don’t you come up and we can take a look at this thing; maybe we can take it out.”

Dr. Cohen successfully removed Abigail’s tumor last month, and said that it was never cancerous, but instead was a type of benign tumor that looked and acted like it was a malignant cancer.

Abby’s father said they learned a big lesson in all of this:

“I truly believe our doctors in Jax were trying to help Abigail and us. But what I have learned through this is that a second opinion is always a good idea. Especially if there is any shadow of a doubt.”

Baby Abby is now recovering at home with her parents and big sister, Audrey.

Boston Children’s Hospital and Dr. Al Cohen told the parents that they could remove the tumor. They did and it turned out to be benign. Abigail is doing very well and she is now a growing, wonderful part of their happy family. All because instead of letting her die, they got a second opinion. The death sentence for little Abigail was lifted and she will hopefully live a long and blessed life. She has a sister who adores her and parents who thank God every moment of every day that He helped them keep their lovely little girl. Baby Abby got a big party when she went home to Florida. They had a lot to celebrate. It was almost like she was born again and her parents are grateful beyond belief.