Nicky and Nate Walla were filming their children when they turned their camera to an absolutely horrifying sight: their son, Gavin, then a toddler, hanging silently from the cord of a window blind.[1] 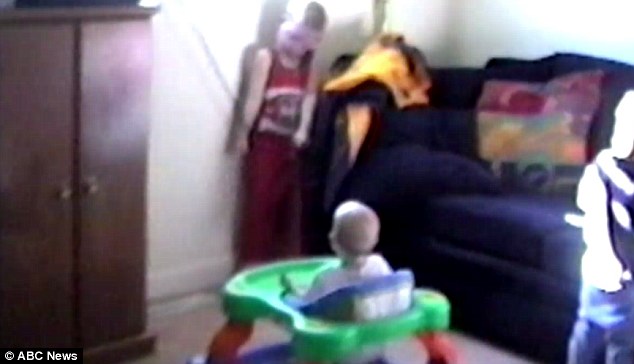 A family has released a home video of their child being strangled by a window blind cord to warn parents of the ‘silent killer’.

Gavin Walla’s mother Nicky was filming two of her other sons playing in their strollers at home in Chippewa Falls, Wisconsin, 10 years ago when she turned to pick up the phone.

But as she spun, she captured one horrific image: Gavin hanging silently and lifeless by the neck from a pull cord.

Nicky drops the camera, screaming, and rushes over.

Incredibly, Gavin survived. His father Nate managed to rush over in time, squeezed him, and he started breathing again.

‘I somehow got Gavin off the window blinds, but I don’t actually remember lifting him off,’ Nicky recalls to ABC News.

The home video, which carried on taping after she dropped the camera on the floor, captured her desperate call to 911 as her husband Nate tries to resuscitate his toddler son.

Finally the viewer hears the touching noise of a young child gasping then crying.

‘I kind of squeezed him a little bit and then he gasped for air,’ Nate explains.

‘We were the lucky ones,’ Nate and Nicky says together.

Nate adds: ‘If you can call it that.’

Now 17, with seven siblings, Gavin has had an otherwise healthy and normal life.

But the Walla family have released their chilling footage as a warning to other new parents.

The number of deaths and injuries by window cord have plummeted since 2009, when the industry brought in new safety measures, such as ensuring no cord is longer than 7.25 inches, which is too short to strangle a child.

Nonetheless, parent groups insist the safety measures are no reason to get complacent.

Hundreds of children a year are strangled by cords, and many are dead by the time they arrive at hospital for resuscitation.

According to Parents For Window Blind Safety, the highest number of fatalities are recording among five-year-olds, ahead of younger and perhaps less agile children.

Elliot Kaye, the chairman of the Consumer Product Safety Commission, told ABC the issue will not be resolved until the industry does away with cords entirely, which he says is possible but less profitable.

‘I see decades, and I’m talking decades, about children once a month getting hanged to death by these products and it’s got to stop,’ Kaye told ABC.

‘I think it’s disgusting. They’re just rolling the dice and taking what they can make in terms of profit.’

Is this something about which we should be afraid?