It would appear that curing Ebola is not so much a cure[1] as some sort of repression. A Scottish nurse who contracted Ebola nine months ago and was cured, suddenly had a total relapse. Her symptoms were not that of Ebola. Nevertheless, that is what she has and she is deathly ill. People who recover from the disease suffer from a wide range of ailments afterwards. Now, it turns out the disease can hide in the body in places like the eye, the prostate gland, amniotic fluid, the placenta, breast milk and the central nervous system. The latter will be the fear with Cafferkey, the nurse. It can also hide in the brain. Men can carry it in their semen for as long as nine months and it can be transmitted sexually. It seems to me that this makes those who have contracted Ebola carriers of a sort and it is very, very dangerous. What a horrific turn of events for that nurse. 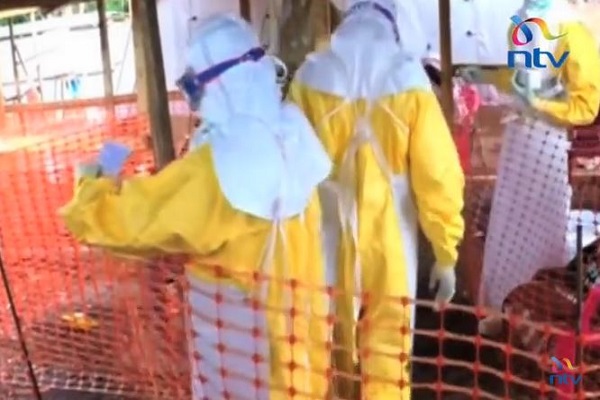 Not only are “cured” patients relapsing, but Ebola may be sexually transmitted.

After declaring “victory” in the war against the Ebola[3] epidemic we were following earlier this year, scientists are now making some disturbing new discoveries about the hemorrhagic fever virus.

Chief among those discoveries is that patients who were “cured” of the disease continue to experience debilitating symptoms[4].

Researchers following 49 survivors of a 2007 Ebola outbreak in Uganda found that — even two years after the illness — they had eye problems like inflammation and blurred vision as well as joint pain, difficulty sleeping, difficulty swallowing and even hearing loss, memory loss and confusion.

A third study examining 105 survivors of the 2014-15 outbreak in Guinea found that about 90 percent had chronic joint pain and 98 percent had poor appetites or an aversion to food. They also reported difficulty with short-term memory, headaches, sleeplessness, insomnia, dizziness, abdominal pain, constipation, sexual dysfunction, and decreased libido and exercise tolerance.

Bausch says, aside from arthritis and eye inflammation, it’s still unclear which issues are directly related to the Ebola virus and which could be caused by the physical and emotional toll on the body. But something is going on.

“It’s clear that there is a post-Ebola syndrome,” he says.

Continuing research on Ebola in the wake of the massive outbreak that has claimed over 11,000 lives has forced infectious disease experts to go back to the drawing board. For example, one of the most widely held theories was that patients who recover from Ebola are immune from future infections of the virus.

However, a Scottish healthcare professional suffered a complete relapse[5] after having been “cured” several months prior.

When nurse Pauline Cafferkey was admitted back into the infectious diseases unit of the Royal Free hospital in London on 9 October, nine months after recovering from Ebola, and then became critically ill, all the previous assumptions about the long-term effects of this virus had to be torn up.

Doctors and scientists are amazed and appalled. It is horrible for Cafferkey and her family, but the implications of her new illness are much more wide-reaching. The UK has a world-class health service. Cafferkey’s family were angry that the possibility that her symptoms were linked to Ebola was not immediately picked up, but even though she did not have the usual fever and vomiting, within days the virus had been identified once more and she had been flown to specialised care.

Another disturbing find is that Ebola can be considered a sexually transmitted disease. Research shows a significant number of male survivors[6] retain the virus in their semen and there has been a reported case of direct transmission of the disease.

The report in the New England Journal of Medicine found two-thirds of men had Ebola in their semen up to six months after infection, and a quarter after nine.

…One study, led by the US Army Medical Research Institute, documents the first “evidence of sexual transmission of Ebola virus”.

The researchers analysed the genetic code of the virus in a man’s semen and the blood of his female partner in Liberia and showed it was “consistent with direct transmission”.

We are now entering the third year of the most recent Ebola crisis, as two new cases have beenreported in West Africa[7].

The World Health Organization says there were two new cases of Ebola in Guinea this week, ending two consecutive weeks in West Africa when no cases of the devastating disease were reported.

The two new patients were not previously identified contacts being tracked by health authorities, suggesting that officials are still unable to monitor everyone exposed to Ebola. WHO spokeswoman Dr. Margaret Harris said Friday the U.N. health agency had expected to see more cases despite the recent lull in the epidemic. She added the cases were in areas where scientists knew Ebola was spreading.

Perhaps the most heartening aspect of this story is that researchers are not acting as if the “science is settled” and are continuing to explore new approaches to fighting this dreadful infection.

Health officials in Scotland are taking this very seriously. They are taking every precaution and have identified 65 people who have had physical contact recently with Cafferkey, including healthcare staff when she reported feeling ill. They will monitor them for 21 days and offer them a vaccination, as is the protocol for Ebola. Cafferkey’s illness is caused by the virus and therefore there is a theoretical risk that the virus could have been transferred to somebody else. But she was not vomiting or bleeding. “The risk to the public remains extremely low,” said NHS Scotland. I’m not sure I’m buying that. I think Ebola has morphed and is far more dangerous than they first thought. I don’t think there is an actual cure either. I think what they give these people is suppressing it. Ebola is back now even after it has been ‘cured.’ I hope they find an actual cure and soon before it mutates again.