Revealed, the terminally ill man who is set to be the first to undergo the world’s first full HEAD transplant pioneered by doctor branded ‘nuts’ [Video]

Frankenstein much[1]? I’m sure the young man volunteering for this procedure is desperate because of his muscle wasting disease. I can understand reaching out to try anything you can when you are facing death and a very unpleasant one at that. And maybe this doctor will surprise the world and pull it off, but I very much doubt it. Renowned physicians are calling him nuts and unethical. One pointed out that there are some things worse than death. Yes, indeedy… there are. 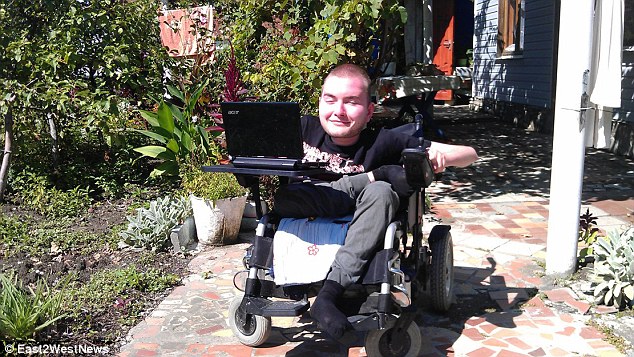 Valery Spiridonov wants to be the first person to undergo a head transplant so he can
have a shot at having a healthy body having suffered from the Werdnig-Hoffman muscle wasting disease.

A man with a fatal medical condition has spoken exclusively to MailOnline about how he is set to become the first person to undergo a head transplant and hopes it could be as soon as next year.

Valery Spiridonov says he is ready to put his trust in controversial surgeon Dr Sergio Canavero who claims he can cut off his head and attach it to a healthy body.

Mr Spiridonov, 30, a computer scientist from Russia, said: ‘My decision is final and I do not plan to change my mind.’

As a lifelong sufferer of the rare genetic Werdnig-Hoffman muscle wasting disease, he says he wants the chance of a new body before he dies.

‘Am I afraid? Yes, of course I am. But it is not just very scary, but also very interesting,’ said Mr Spiridonov from his home in Vladimir, a city 120 miles east of Moscow.

‘But you have to understand that I don’t really have many choices’, he said. ‘If I don’t try this chance my fate will be very sad. With every year my state is getting worse.’

Dr Canavero and Mr Spiridonov have talked via Skype though they have not met yet and the doctor has not reviewed his medical records.

The Italian told CNN[2] he has received many email and letters from people seeking the procedure but he insists the first patients will be people suffering from a muscle wasting disease.

Dr Canavero has named the procedure HEAVEN, which is an acronym for head anastomosis venture. Anastomosis involves the surgical connecting of two parts.

He insists all the necessary techniques already exist to transplant a head onto a donor body.

The first monkey head transplant was performed 45 years ago and a basic operation on a mouse was carried out in China recently.

But critics say Dr Canavero’s plans are ‘pure fantasy’. The Italian has been compared to the fictional gothic-horror character Dr Frankenstein.

Dr Hunt Batjer, president elect of the American Association for Neurological Surgeons, told CNN: ‘I would not wish this on anyone. I would not allow anyone to do it to me as there are a lot of things worse than death.’

The cost of the 36-hour operation, which could only be performed in the one of the world’s most advanced operating theatres, has been estimated at £7.5million.

The new body would come from a transplant donor who is brain dead but otherwise healthy.

Both donor and patient would have their head severed from their spinal cord at the same time, using an ultra-sharp blade to give a clean cut.

The patient’s head would then be placed onto the donor’s body and attached using what Canavero calls his ‘magic ingredient’ – a glue-like substance called polyethylene glycol – to fuse the two ends of the spinal cord together.

The muscles and blood supply would be stitched up, before the patient is put into a coma for four weeks to stop them from moving while the head and body heal together.

When they wake the patient should be able to move, feel their face and even speak with the same voice. Powerful immunosuppressant drugs should stop the new body from being rejected.

What I’d like to know is this… if this procedure is so mapped out and ready for prime time, why hasn’t the good doctor practiced on those who have had a catastrophic separation of the spinal cord and brain first? Reconnecting all the nerves, etc. is not like putting a puzzle together. The complexity of it rivals the creativity of a deity. Yet, instead of building on interim surgeries and successes, he jumps straight to a head transplant. It might even be more feasible to use a robotic body – although that would be nightmarish in its implications as well. The monkey this was tried on live about 8 days. The body and the head rejected each other and the monkey never breathed on its own again. No word on the mouse. I wish a miracle for this young man, but I fear that all he will get is a final ticket aboard the ferryman’s boat. 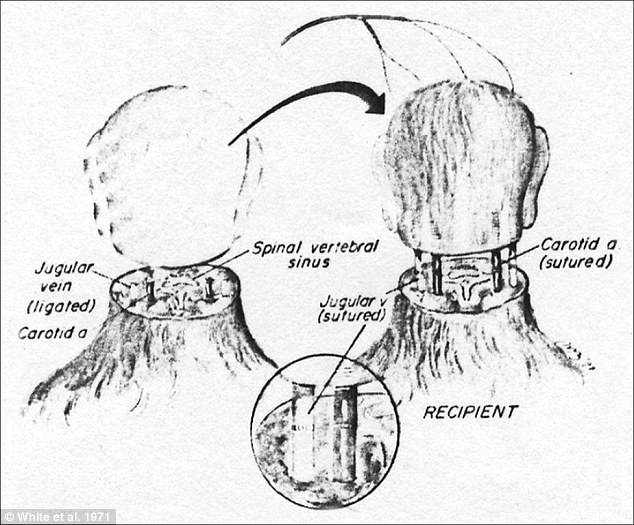 History: In 1970, Dr. Robert White transplanted the head of one monkey onto the body of another,
as shown in this diagram. If Mr. Spiridonov’s head were to be successfully transplanted his jugular vein
and spinal cords would have to be similarly fused with those of his new donor body.
Endnotes: