She eats 8,000 calories a day but doesn’t gain weight… and you wouldn’t trade places with her

This definitely stirs pity in my heart[1]. Nichola looks the picture of health… young, pretty, slender… but she’s very ill and the odds are against her making it to her 40th birthday. She has Cystic Fibrosis. A genetic condition that primarily affects the lungs, but it attacks the digestive system as well, filling both with a sticky mucus. It causes infections and inflammation of the lungs, which causes breathing problems. There is no cure and it is a killer. She has to eat 8,000 calories a day just to maintain her slim weight. She is currently unemployed and has gone into debt and turned to food banks to get the food she needs. The girl is literally sick of eating. But constant snacking and eating is what is keeping her alive. She certainly doesn’t live to eat – she’s eating to live as long as she can. 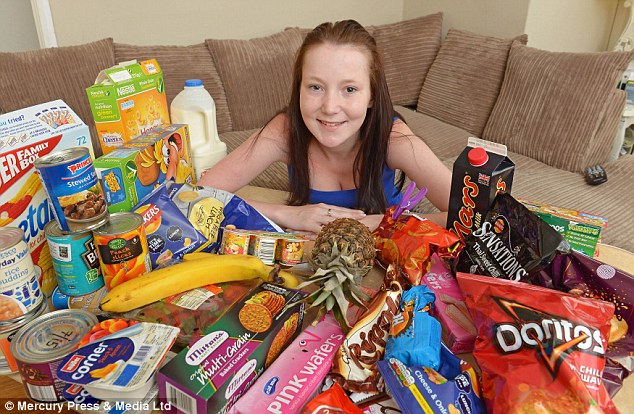 Slim Nichola Daintree eats her way through at least 8,000 calories every day.
The svelte 20-year-old munches fry-ups, crisps, chocolate and snacks just to maintain her weight.

Slim Nichola Daintree eats her way through at least 8,000 calories everyday – more than an Olympic weightlifter – but never puts on a pound.

Most days she consumes more than 8,000 calories – four times the recommended daily average intake for a woman.

But Nichola says she must eat vast quantities to stay alive as she suffers from cystic fibrosis – a condition which means she is unable to absorb nutrients from food.

She gets through so much that her food costs- which add up to £300 a week – have forced the unemployed young woman into debt and she now relies on food banks.

‘I have to eat 8,000 calories every day just to maintain my weight,’ said Nichola.

‘I spend most of my benefits money on food and I’m constantly eating. I’m sick of eating, but the foodbank really helps.’

A typical day for Nichola begins with a full English breakfast including bacon, sausages, eggs and tomato.

For lunch she enjoys sandwiches, chocolate and crisps while dinner would be a protein-packed meal such as two chicken breasts with more crisps and chocolate.

Supper might be a bacon sandwich or a big bowl and cereals and Nichola will also munch on a selection of snacks throughout the day such as biscuits, cakes and fruit.

With so much food needed to sustain her, Nichola says she often finds her fortnightly employment support allowance and disability living allowance does not cover the cost of her high-calorie diet.

Instead she must rely on her local foodbank in Anglesey, off the north west coast of Wales, which deliver food packages twice a month.

Nichola, from Amlwch, Anglesey, said: ‘The foodbank has been a lifesaver.’

She said that her cystic fibrosis, a genetic disorder that affects mostly the lungs but also the pancreas, liver, kidneys and intestines, can leave her bed-bound and unable to walk for days on end.

Nichola also suffers from an incurable condition called sarcoidosis, that causes small patches of red and swollen tissue, called granulomas, to develop in the organs of the body.

She featured on a recent edition of the BBC’s Newsnight in an item focusing on foodbanks and poverty on Anglesey.

Nichola must constantly be in and out of the hospital. I know she is so sick that there are many days she can’t get out of bed. Silently I say a little prayer that the illness disappears and she is somehow cured – Cystic Fibrosis is a horrific way to go and a painful affliction. Yep, she can eat all she wants and there isn’t a minute in the day she wishes she couldn’t. What some would see as a blessing is a curse to this young woman. I don’t see how she could hold a job at all with this crippling her. In Britain, they are using her as a poster child for poverty and food banks which entirely misrepresents her plight. The faulty gene is carried by over 2 million people in the UK. Perhaps the UK should focus more on scientific research and a cure than decrying class inequality and forwarding attempts at wealth redistribution.