Dr. Sandra Lee[1] (aka Dr. Pimple Popper) is at it again… this time with a man who is an employee of a friend of hers. He was terrified to come into her office. He had a bad experience with another doctor and claims the anesthesia administered almost killed him. So, she had to put him at ease and there is no one better at that! He had a large bump on his head… specifically on his frontal scalp. He had tried repeatedly to remove it himself, but it just got worse. Dr. Lee would have done a full surgery if she had known the man was so skittish, instead of cutting into it and trying to evacuate it. It’s a huge bump and turned out in the end to be a tumor. 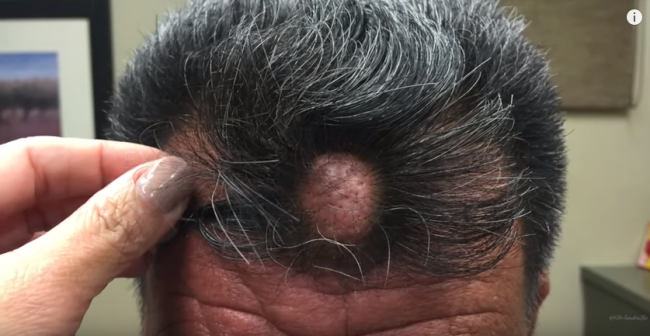 As you will see, this growth was truly a struggle to remove. And now that I know the pathology results, I now understand why.

So, to back up a little, this patient is a wonderful, sassy man, who is an employee of a friend of mine. It was VERY difficult to get him into the office to see me. When I saw him for the first time, he was extremely nervous about being in my office. He HATES doctors. He told me a story about when he had to have a surgery and they gave him a little anesthesia and he almost died (these are his words). Of course, there are many people like him in this world, who have had bad experiences in doctors’ offices or may just have extreme fear about being examined by a doctor or having a medical procedure.

So, this is why he waited so very long to have this bump removed. And I knew that he had been manipulating this area, trying to get rid of it himself. Pushing on it and squeezing material out of it… from his descriptions, I thought he could have a pilar cyst which he had pushed and squeezed so many times that it had a lot of scar tissue.

However, as I began to try to excise this growth, I suspected that this could be something different. And if I had known beforehand, coupled with the knowledge that he was difficult man to get into the office in the first place because of his fear of surgery, I would have probably done a more involved, extensive surgery to get rid of this growth completely. I would have excised the entire bump (not just made a cut in the center to try to evacuate a presumed cyst/sac and contents), which likely would have required a graft (I don’t think I could close that large of an area primarily/side to side closure).

So, as you can see, this excision took me longer than expected… it wasn’t straight forward. And then I got the pathology report on the tissue, which confirmed that this was not a pilar cyst at all.

He has a Proliferating Follicular Cystic Neoplasm which is a trichilemmal tumor. A trichilemma tumor is a type of growth originating from the hair follicle. Yes, it had cystic elements which is why it looked a little like a pilar cyst which is the most common type of cystic growth on the scalp. This growth he has is a variant of squamous cell carcinoma, which is a type of skin cancer. However, this has an extremely low likelihood of spreading elsewhere on the body (very low risk of metastasis), so it is likely mainly just locally destructive.

I explained all of this to him and told him that I recommend that he remove the entire growth via Mohs Micrographic Skin Cancer surgery, which is the best was to remove a growth like this with the lowest recurrence rate while also removing as little skin as possible, thereby most likely creating the smallest scar possible. This is all done under local anesthesia. I think you all can tell he is still fearful of us doctors. Let’s hope he returns soon. These types of skin cancers are typically slow growing but won’t just disappear. They need to be excised completely. Stay tuned, as of the date of this video being published, he has not yet called back to schedule another appointment.

What squirted and seeped out was a bunch of blood from the tumor itself. It originated from a hair follicle. It looked like a cyst, but didn’t present as one when opened up. I guess this is related to skin cancer. Dr. Lee recommended surgery to remove the entire growth as it was cancerous. Hopefully, that is what he will do. Although this type of cancer is a slow growing one, it does not go away on its own and should be removed entirely. I don’t know if this type of cancer can spread… I doubt it, but I’d be into a doctor right away. It’s a good thing he went to Dr. Lee and I hope he follows her advice.