WATCH: If You’re an Anti-Vaxxer, Then You Won’t Get This Video. But Everyone Else Will Think It’s Hilarious.

The idea that people would willingly turn their back on a medical advancement that has saved literally millions of lives seems like the most idiotic thing that a person could ever come up with. But that’s exactly what anti-vaxxers do, for literally no scientific reason at all beyond some BS they read on the internet — and an awesome new video lampoons these morons beautifully. 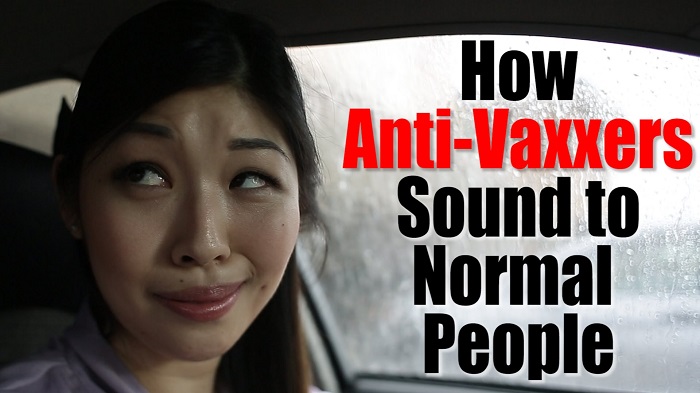 It’s pretty safe to assume that Girl Pants Productions doesn’t have any anti-vax Kennedy money behind it, given the direct shot it takes at those who are passionate about NOT vaccinating their children.

In an interview with Buzzfeed, the creators of the video said this:

It was as though they were just making things up that had absolutely no correlation to one another. I wanted to point out just how absurd anti-vaxxers sound, while trying to make people laugh.

In fact, some of the arguments in the video were from claims made by anti-vax websites and Girl Pants Productions just replaced the words.

Before vaccines, people were either killed or suffered lifelong injuries and disabilities from diseases that didn’t care whether or not you ate organic or used “all-natural” products. That people would willingly go back to a time when children routinely died because they read some idiocy on the internet and believed it is mind-bogglingly depressing.