This is a new low[1] even for Hillary Clinton. If someone makes a one-time donation to the Clinton campaign, they will repeatedly overcharge and deduct amounts from that person’s account. That means if they donate, let’s say… $20… the Clinton campaign will take $40, $60, $80… they won’t go over $100, because that triggers a fraud investigation by the bank. One of the largest banks in the nation, Wells Fargo, is getting up to 100 calls a day from Clinton donors complaining that they have been scammed and overcharged. The bank is refunding between $700 and $1200 a day. 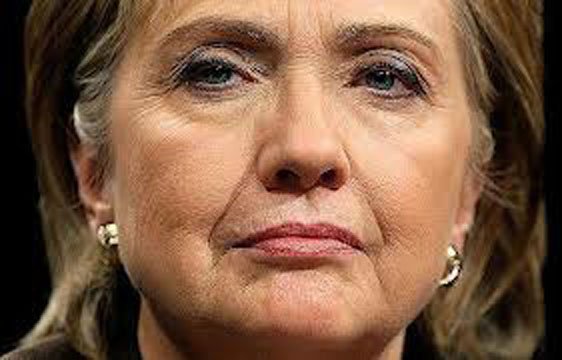 Hillary Clinton’s campaign is stealing from her poorest supporters by purposefully and repeatedly overcharging them after they make what’s supposed to be a one-time small donation through her official campaign website, multiple sources tell the Observer.

The overcharges are occurring so often that the fraud department at one of the nation’s biggest banks receives up to 100 phone calls a day from Clinton’s small donors asking for refunds for unauthorized charges to their bankcards made by Clinton’s campaign. One elderly Clinton donor, who has been a victim of this fraud scheme, has filed a complaint with her state’s attorney general and a representative from the office told her that they had forwarded her case to the Federal Election Commission.

“We get up to a hundred calls a day from Hillary’s low-income supporters complaining about multiple unauthorized charges,” a source, who asked to remain anonymous for fear of job security, from the Wells Fargo fraud department told the Observer. The source claims that the Clinton campaign has been pulling this stunt since Spring of this year. The Hillary for America campaign will overcharge small donors by repeatedly charging small amounts such as $20 to the bankcards of donors who made a one-time donation. However, the Clinton campaign strategically doesn’t overcharge these donors $100 or more because the bank would then be obligated to investigate the fraud.

“We don’t investigate fraudulent charges unless they are over $100,” the fraud specialist explained. “The Clinton campaign knows this, that’s why we don’t see any charges over the $100 amount, they’ll stop the charges just below $100. We’ll see her campaign overcharge donors by $20, $40 or $60 but never more than $100.” The source, who has worked for Wells Fargo for over 10 years, said that the total amount they refund customers on a daily basis who have been overcharged by Clinton’s campaign “varies” but the bank usually issues refunds that total between $700 and $1200 per day.

Hillary Clinton is stealing money on a massive scale from her poorest supporters. It’s just unconscionable. The fraud specialist says that Clinton donors who call in will attempt to resolve the issue with the campaign first, but they never get anywhere. “They will call the Clinton campaign to get their refund and the issue never gets resolved. So they call us and we just issue the refund. The Clinton campaign knows these charges are small potatoes and that we’ll just refund the money back.” This is fraud and Clinton’s people should be charged over it. 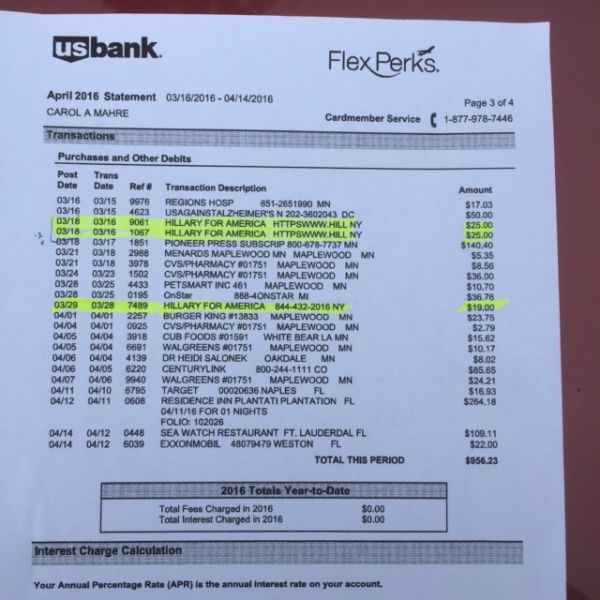 Hillary for America processed a total of $94 in unauthorized charges to Carol Mahre’s US Bank account. This follows a pattern in which unwitting donors are charged multiple times, but always for a total of less than $100, which is a key trigger point for banks’ internal action systems. Photo: Courtesy Carol Mahre