No doubt, it’s a long list and there’s lots of competition. If you can top this moment for sheer gouge-out-your-eyes awful, we’re willing to listen.

But to hear creepy Delaware senator Tom Carper’s creepy spoken-word rendition of Donna Sommer’s “She Works Hard For The Money” as an introduction at a Hillary Clinton campaign event? You’d better bring your A-game if you want to beat this[1]. 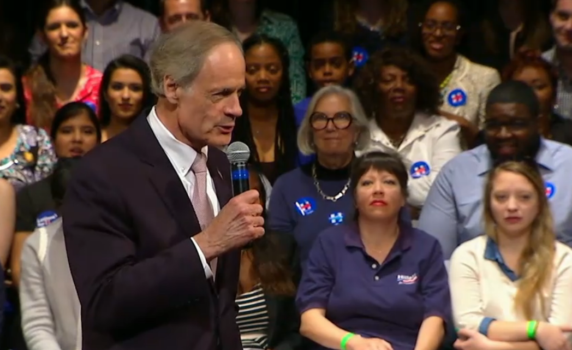 Front-running Democrat candidate and former Secretary of State Hillary Clinton expected to breeze through a cakewalk of a primary season on her way to her coronation as the nominee of her party.

Unfortunately for her, she has instead found herself fending off a determined socialist challenger while running a lackluster campaign full of missteps, gaffes and awkward moments. Oh, and her own party’s base voters don’t trust her.

Clinton’s campaign suffered one of its most awkward moments of the entire cycle recently during a campaign rally in Delaware, according to Legal Insurrection[3].

It’s a good thing the Delaware primary is over and the First State isn’t an overly competitive one in the general election. You can bet the Clinton campaign isn’t going to be too keen on having Carper as a surrogate ever again. There’s only so much creepiness that even Democrat voters can tolerate.

WATCH: Senator leads @HillaryClinton[4] supporters in rendition of "She Works Hard for the Money."https://t.co/FMrIAAfgLu[5]